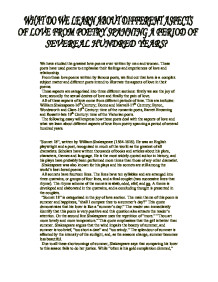 We have studied the greatest love poems ever written by men and women. These poets have used poems to emphasise their feelings and experiences of love and relationship.

We have studied the greatest love poems ever written by men and women. These poets have used poems to emphasise their feelings and experiences of love and relationship. From these love poems written by famous poets, we find out that love is a complex subject matter and different poets intend to illustrate the aspects of love in their poems. These aspects are categorised into three different sections: firstly we see the joy of love; secondly the sexual desires of love and finally the pain of love. All of these aspects of love come from different periods of time. This era includes: William Shakespeare-16th Century; Donne and Marvell-17th Century; Byron, Wordsworth and Clare-19th Century: time of the romantic poets, Barrett Browning and Rossetti-late 19th Century: time of the Victorian poets. The following essay will express how these poets deal with the aspects of love and what we learn about different aspects of love from poetry spanning a period of several hundred years. "Sonnet 18", written by William Shakespeare (1564-1616). He was an English playwright and a poet, recognised in much of the world as the greatest of all dramatists. Scholars have written thousands of books and articles about his plots, characters, themes and language. He is the most widely quoted author in history, and his plays have probably been performed more times than those of any other dramatist. Shakespeare was also known for his plays and his sonnets are still among the world's best-loved poems. All sonnets have fourteen lines. ...read more.

This portrays, that if she's going to make the poet wait too long, then she would die and her beauty will be wasted all for nothing. Fourthly, he gives offers and solutions. "Let us roll our strength and all, our sweetness up into one ball," this suggests that they should seize the moment now and the imperative "let us" is also used to persuade his girlfriend. Finally, he uses pronouns. "Thus, though we cannot make our sun stand still, yet we will make him run." Marvel uses pronouns such as "we" and "our" to make it sound as if they are united against time and this quote proves that he won't let time take advantage. There are many comparisons between "To His Coy Mistress" and "The Flea" by John Donne (1572-1631). Donne's poems reveal the same characteristics that typifies the work of the metaphysical poets: dazzling word play, often explicitly sexual; paradox; subtle argumentation; surprising contrasts; intricate psychological analysis; and striking imagery. Marvell and Donne both try to persuade their partners to give into their desires. Marvell uses flattery to persuade his girlfriend while Donne uses a flea to emphasis that their blood is together in the flea so why can't they be together. "It sucked me first, and now sucks thee, And is this flea our two bloods mingled be." Marvell kept on commenting on his lover's appearance but Donne kept on talking about the flea. The most effective poem was "To His Coy Mistress." I believe this because in "The Flea," the poet's partner got infuriated because the poet never stopped talking about the flea so she ends up killing the flea. ...read more.

"When Lucy ceased to be." In "The Lost Love" the use of the lament "oh" illustrates that his emotions have taken over. This poem was taken from lyrical ballads, which was the most important work in the Romantic period. Form John Clare's "First Love" and William Wordsworth's poem "The lost Love." I have learnt that when love isn't returned or you lose a loved one; will have an awful effect on a person's life. I have also learnt that Romanticism was very important in these two poet's lives as this illustrated the emotional and dramatic aspect of love. In conclusion I have learnt from reading poetry spanning a period of several hundred years that people can emphasise their love by comparing it to positive and personal things and also believing that your love will last forever even after death will signify the trust and love that two people shared. In addition I have learnt you can use persuasive devices to convince your partner to give into your desires and also the loss of a loved one or the disappointment of love when it isn't returned can have a profound effect on a person's well being mentally and physically, this was expressed through the emotional and dramatic Romantic poems. To summarise, I have learnt that love can lead to happiness, where there is trust, love and care between two people to the sexual stress, where you want your partner to give into the sexual side of love to the end or loss of love, where someone you love dearly dies or the person you love doesn't feel the same way about you and your love isn't returned. ...read more.