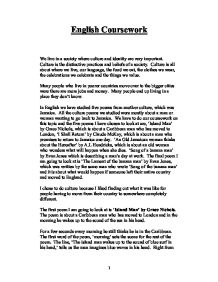 We have to do our coursework on this topic and the five poems I have chosen to look at are, 'Island Man' by Grace Nichols, which is about a Caribbean man who has moved to London, 'I Shall Return' by Claude McKay

English Coursework We live in a society where culture and identity are very important. Culture is the distinctive practices and beliefs of a society. Culture is all about where we live, our language, the food we eat, the clothes we wear, the celebrations we celebrate and the things we value. Many people who live in poorer countries move over to the bigger cities were there are more jobs and money. Many people end up living in a place they don't know. In English we have studied five poems from another culture, which was Jamaica. All the culture poems we studied were mostly about a man or woman wanting to go back to Jamaica. We have to do our coursework on this topic and the five poems I have chosen to look at are, 'Island Man' by Grace Nichols, which is about a Caribbean man who has moved to London, 'I Shall Return' by Claude McKay, which is about a man who promises to return to Jamaica one day. 'An Old Jamaican woman thinks about the Hereafter' by A.L Hendricks, which is about an old woman who wonders what will happen when she dies. 'Song of a banana man' by Evan Jones which is describing a man's day at work. The final poem I am going to look at is 'The Lament of the banana man' by Evan Jones, which was ...read more.

It is used to give a slow pace and effect. The words, 'forest fires' and 'blue-black' is alliteration. More alliteration is, 'that bathe the brown blades of the bending grasses', 'fiddle and fife' and 'dances, dear delicious.' The words 'Golden noon' and 'Sapphire skies' are colour metaphors; they give a warm image and show us that Jamaica is very precious to him. The line, 'To ease my mind of long, long years of pain' gives us an image of the man's unhappiness. The feelings the poet associates with Jamaica is that he is happy when he looks at or thinks of his country. In the poem, the colours brighten up the poem; show warmth, they are pleasant and precious. When the poet returns to Jamaica he imagines himself by the streams, looking at the blue-black skies, sapphire skies and the rushing mountains. The poem has a calm, peaceful and positive atmosphere. Looking back at Jamaica the man remembers dances, singing, the native living and his simple life. 'Long, long years of pain' could have been caused by not been able to go home and see his friends and family, being on his own and living in a place where he knew nobody. This poem made me feel sorry for the man because he can't go home to his home country; the poem has a dream like quality. ...read more.

The man is quite surprised that he gets his uniform and his ticket punch free. Compared to the work he did in Jamaica, punching tickets in England is easy and if he gets bored punching tickets he just lets the people through and nobody says anything to him. We get the impression that in Jamaica he got sick quite a lot because it says in the poem 'sickness doesn't touch me here.' In Jamaica I don't think the man had many possessions because he seemed so pleased to have a room of his own, an iron bed, a table and a chair. In England people treat him like an outcast and stare at him, because of this he thinks they don't want him in their country. The man wants to die in Jamaica but he says he can never go back there. At the beginning of the poem the man is tired of England and tired of us. This stanza is soft; it drifts off, sad, tired, slow and depressed tone. The character in the poem finds England cold and dark, we know this because it says, 'if it col', it col', if it rainin', it rainin', I don' mind if its mostly night.' The character is a proud man who tends to hide his feelings because it says, 'You won' catch me bawlin' ant homesick tears if I don' see Jamaica for a t'ousand years.' ?? ?? ?? ?? 1 ...read more.