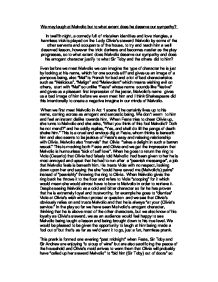 We may laugh at Malvolio but to what extent does he deserve our sympathy?

We may laugh at Malvolio but to what extent does he deserve our sympathy? In twelfth night, a comedy full of mistaken identities and love triangles, a harmless trick is played on the Lady Olivia's steward Malvolio by some of the other servants and occupants of the house, to try and teach him a well deserved lesson, however the trick darkens and becomes nastier as the play progresses, so to what extent does Malvolio deserve our sympathy and does his arrogant character justify to what Sir Toby and the others did to him? Even before we meet Malvolio we can imagine the type of character he is just by looking at his name, which for one sounds stiff and gives us an image of a pompous being, also "Mal" is French for bad and a lot of bad characteristics such as "Malicious", "Malign" and "Malevolent" which means wishing evil on others, start with "Mal" so unlike "Feste" whose name sounds like "festive" and gives us a pleasant first impression of the jester, Malvolio's name gives us a bad image of him before we even meet him and I think Shakespeare did this intentionally to create a negative imagine in our minds of Malvolio. ...read more.

Despite seeing Malvolio as a cold and bitter character so far he has proven that he is extremely loyal and trustworthy, for example he goes to "dismiss" Viola at Olivia's wish without protest or question and we see that Olivia's obviously relies on and trusts Malvolio and that he is always "at your (Olivia's service." In the play so far we have seen Malvolio's arrogant character, thinking that he is above most of the other characters, but we also know of his loyalty as Olivia's steward, we as an audience would feel happy to see Malvolio being taught a lesson and being brought down to his true level. We would be pleased to be given the opportunity to laugh at him being made a fool out of but that's as far as we'd want it to go, just a fun, harmless prank. This prank is formed one evening "past midnight" when Feste, Sir Toby and Sir Andrew are enjoying "a stoup of wine" but are also sacrificing the peace of the household and Olivia's maid arrives to warn them that Olivia will probably have "called up her steward Malvolio" to "bid him (Sir Toby) ...read more.

Sir Toby also refers to Malvolio's beliefs in "no more cakes and ale", which basically means no fun, and these are exactly why the trick is played on him. After telling Maria that she "prized my lady's (Olivia's) favour at anything more than contempt, you would not give means for this uncivil rule" which is scolding Maria for letting the night happen, Malvolio exits and with and insult of "go shake your ears" to Malvolio's departure the plot is unveiled. They start to talk of a "sport royal" to "make a fool of him (Malvolio)." Maria talks of "drop (ping) in his way some obscure epistle of love" from Olivia, to make Malvolio a "common recreation." Here we look forward to seeing Malvolio being brought down to his true level; we can't wait to see him being made a fool of. The next time we see Malvolio is the scene when he finds the "love letter", Maria has dropped the letter in Malvolio's path and Sir Toby, Andrew, and Fabien whom Malvolio stopped from "bear baiting" are hiding behind the box trees, when Malvolio approaches we find that he is vainly imagining himself being "Count Malvolio". ...read more.