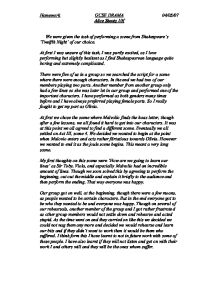 We were given the task of performing a scene from Shakespeare's 'Twelfth Night' of our choice.

We were given the task of performing a scene from Shakespeare's 'Twelfth Night' of our choice. At first I was unsure of this task, I was partly excited, as I love performing but slightly hesitant as I find Shakespearean language quite boring and extremely complicated. There were five of us in a group so we searched the script for a scene where there were enough characters. In the end we had two of our members playing two parts. Another member from another group only had a few lines so she was later let in our group and performed one of the important characters. I have performed as both genders many times before and I have always preferred playing female parts. So I really fought to get my part as Olivia. At first we chose the scene where Malvolio finds the hoax letter, though after a few lessons, we all found it hard to get into our characters. It was at this point we all agreed to find a different scene. ...read more.

We developed our ideas through problems and their solutions. We decided to cut out the middle and replace it with a brief explanation as the scene was too long and we found the middle rather boring. We also got many ideas how to set our scene and develop our characters by watching the video of 'Twelfth Night' At first when I rehearsed my lines I was actually reading my lines with the wrong voice expression. I was expressing with an angry and serious tone. But from watching the video I benefited a lot, as I know what voice expression to put in and in what context I was speaking. I knew what situation was and how the actor performed it well. From this I created my own role of 'Olivia' based upon the video with a few of my own ideas put in. I now knew how to play my part. At first I act curious and I then later become concerned/happy towards the end of scene. ...read more.

I thought that everyone else enjoyed it though I believe it wasn't the most gripping performance as its very hard to enjoy something that a majority of the audience do not understand word to word. Though by our gestures and voice expression they get the gist of the story line and I believe, from what I heard they enjoyed it. I really enjoyed my character especially as she was so high up in the hierarchy. She was an elaborate beautiful character, and I enjoyed be so well spoken and innocent! The language was hard to get around though I am a very quick learner and within in no time I had learnt my words, I just seemed to get tongue tied in certain points but I can always improve on that. We still yet are to perform our second scene but from what we have done already I have thoroughly enjoyed acting my character and wish to adapt it even more. Homework GCSE DRAMA 04/05/07 Alice Skeats 10f ...read more.