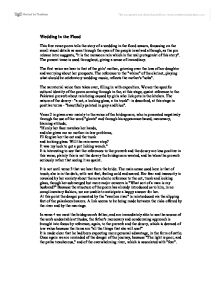 Wedding in the Flood

Wedding in the Flood This free verse poem tells the story of a wedding in the flood season, focussing on the small visual details as seen through the eyes of the people involved although, as the pre release intro suggests, "it is the monsoon rain which is the real protagonist of this story". The present tense is used throughout, giving a sense of immediacy. The first voice we hear is that of the girls' mother, grieving over the loss of her daughter and worrying about her prospects. The reference to the "whine" of the clarinet, playing what should be celebratory wedding music, reflects the mother's "sobs". The narratorial voice then takes over, filling in with exposition. We see the specific cultural identity of the poem coming through in the, at this stage, quaint reference to the Pakistani proverb about rain being caused by girls who lick pots in the kitchen. The nature of the dowry - "a cot, a looking glass, a tin trunk"- is described, at this stage in positive terms - "beautifully painted in grey and blue". ...read more.

Because the structure of the poem has already introduced us to him, in no complimentary fashion, we are unable to anticipate a happy answer for her. At this point the danger presented by the "swollen river" is reintroduced via the slipping feet of the palankeen bearers. A link seems to be being made between the risks offered by the river and by the marriage. In verse 4 we meet the bridegroom's father, and are immediately able to see the source of the son's undesirable attitudes; the father's mercenary and condemning approach is brought into focus by reference, again, to the proverb and the dowry, which is deemed of low value because the items are "all the things that she will use!" It is made clear that he had been expecting more personal advantage, in the form of cattle. Once again we are reminded of the danger of the journey, because "The light is poor, and the paths treacherous," and of the overwhelming river, which is associated with "fear". ...read more.

leads me to review my position on this. I have been convinced that this is about death, the ultimate consumation; Hamlet described death as "a consumation / Devoutly to be wish'd" so there are very respectable literary precedents. Further, the palankeen can be seen as a coffin, carried as it is by "bearers". In this reading, then, the whole wedding party dies as a result of the flood. The sexual imagery is still there - sex and death have always been linked in literature - but it is representative of death rather than being an end in itself. Mr Sheehan argues that Taufiq Rafat sees the flood as sweeping away the old way of doing things, such as the arranged marriage described here, to make way for the new. Maybe I'm responding to this poem in too much of a European feminist way, but I feel that the poet is presenting the attitudes expressed by the male characters in it as patriarchal and chauvinist. The sequence of events described is comic but the overall feel of the poem, especially in terms of the potential of happiness for the bride, strikes me as negative and hopeless. ...read more.