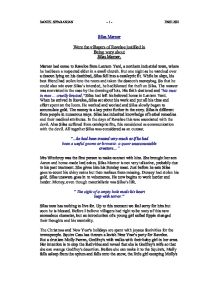 Were the villagers of Raveloe justified in Being wary about Silas Marner.

Silas Marner Were the villagers of Raveloe justified in Being wary about Silas Marner. Marner had come to Raveloe from Lantern Yard, a northern industrial town, where he had been a respected elder in a small church. But one night as he watched over a deacon lying on his deathbed, Silas fell into a cataleptic fit. While he slept, his best friend had stolen into the room and taken the deacon's moneybag. So that he could also win over Silas's intended, he had blamed the theft on Silas. The weaver was convicted in the case by the drawing of lots. His faith shattered and "his trust in man ... cruelly bruised," Silas had left his beloved home in Lantern Yard. When he arrived in Raveloe, Silas set about his work and put all his time and effort spent on the loom. He worked and worked and Silas slowly began to accumulate gold. The money is a key point further in the story. Silas is different from people in numerous ways. Silas has inherited knowledge of herbal remedies and their medical attributes. In the days of Raveloe this was associated with the devil. Also Silas suffered from cataleptic fits, this considered as communication with the devil. All together Silas was considered as an outcast. "...he had been treated very much as if he had been a useful gnome or brownie- a queer unaccountable creature..." ...read more.

After losing all his money she is the golden treasure that replaces his stolen gold. "Gold! -His own gold- brought back to him as mysteriously as it had been taken away!" And "He leaned forward at last, and stretched forth his hand; but instead of the hard coin with the familiar resisting outline, his fingers encountered soft warm curls." And ": It was a sleeping child." While she is a young child and growing he will not stray from her at all. Bringing up Eppie is a hard task but it makes him happy. Before the happiness of his gold was only materialistic but now he shares true happiness with Eppie. "Unlike the gold which needed nothing, and must be worshipped in locked solitude- which was hidden away from the daylight, was deaf to the song of birds, and started to no human tones. And " Eppie was a creature of endless claims and ever- growing desires, seeking and loving sunshine, and living sounds, and living moments; making trial of everything, with trust in new joy, and stirring human kindness in all eyes that looked on her." At a young age Eppie is very mischievous and will often playfully explore. She has a distinct love for the world and all its floral nature. You also see this when she grows up. You see that she is keen on having a garden made by her Silas and Aaron. ...read more.

Children so innocent, when generally faced with Silas would be scared. But with Eppie the likeness of another child with him makes other children less wary of him, and more trusting. "No child was afraid of approaching Silas when Eppie was near him-." But now overall all people treated Silas a new man with Eppie by his side. Eppie has affected the whole of Raveloe. She can change people's view on Silas and their relationship grows strong as he begins to grow stronger in the community. "- There was no repulsion around him now, either for young or old." Eppie is the person and the reason that reconnects him with the rest of the world. " The little child had come to link him once more with the whole world." Conclusively think that the people of Raveloe had been justified in their views of Silas Marner. As a reader I felt sympathy for Silas but when in the characters view I don't. It was common then, to believe in witch craft and such aberrant things so, people in their own way must of felt vigilant of him. But after the affect of Eppie people changed their views and were no longer wary of Silas Marner. I feel that Eppie brought Silas back into the bosom of Raveloe. At the beginning there was reason to be wary but Silas and Eppie grew and perspective changed and now a great deal of love is shared between Silas and Raveloe. DANIEL SITARANJAN - 1 - ENGLISH ...read more.