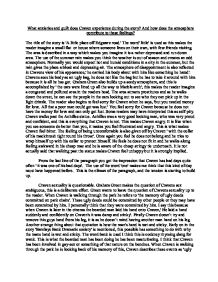 What anxieties and guilt does Craven experience during the story? And how does the atmosphere contribute to these feelings?

What anxieties and guilt does Craven experience during the story? And how does the atmosphere contribute to these feelings? The title of the story is 'A little place off Edgware road.' The word' little' is used as this makes the reader imagine a small flat or house where someone lives on their own, with few friends visiting. The area is described in a way which makes you imagine it is a rather depressed and run down area. The use of the summer rain makes you think the weather is out of season and creates an odd atmosphere. Normally you would expect hot and humid conditions in a city in the summer, but the rain gives the place a bleak and depressing air. The atmosphere of disappointment is also reflected in Cravens view of his appearance,' he carried his body about with him like something he hated'. Cravens sees his body as an ugly bag, he does not like the bag but he has to take it around with him because it is all he has got. Graham Green also builds up a seedy atmosphere, and this is accomplished by ' the cars were lined up all the way to Marble arch', this makes the reader imagine a congested and polluted area in the readers head. ...read more.

Craven fears what might happen to his body when he dies. He has no pride in his body; he sees it as something that he carries with him. When Craven walks by the statue it reminds him of his body. It brings back his dreams, or for him nightmares of how his body will never rot when he dies and how he will always have the same body, 'Anew a horrifying fact that the body doesn't decay' this quote is a reference to how the body does not rot when you die. When Craven is looking at the statue it is raining and the rain drops would have made the statue shine and the area all around would have been quiet. The atmosphere created is just like in his dream, and he is reminded of all the dead bodies under the ground and with the statue standing tall and proud it looks like it is waiting to rise again. The statue is also wet from the rain, which Craven described earlier as just like ' glittering tinselly rain'. This atmosphere would have contributed to Cravens anxiety and brought back all his nightmares. Craven's mind would be telling him this is what it is going to be like when he dies and there will be statues all around him not rotting, but just waiting to rise. ...read more.

The little bearded man is said to have sprayed Craven with his breath when he talks to him,' he sprayed him with damp breath'. Craven doesn't think much of this at the time, he thinks that it is just a bit unpleasant. Towards the end of the story Craven thinks that he has been sitting next to a killer. He then leaves the cinema and phones the police and says he was sitting next to the murderer of the bay waters tragedy. After Craven phones the police he realises that once again he is thinking about his dream and bodies. Craven then realises that he cannot stop himself thinking about this. Craven now is extremely anxious because he knows that he may be going crazy. The last thing before Craven goes over the edge is when he sees blood on his face, 'own face sprinkled by tiny drops of blood'. This pushed Craven over the top he know he thinks he is crazy and starts screaming that he wont go mad. Craven may also be very anxious because he sees that there is blood on his face from a dead man, this would incriminate him. Craven may be thinking that he is going to jail because people may think that he killed the bearded man. ...read more.