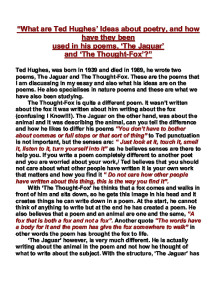 &quot;What are Ted Hughes' Ideas about poetry, and how have they been

"What are Ted Hughes' Ideas about poetry, and how have they been used in his poems, 'The Jaguar' and 'The Thought-Fox'?" Ted Hughes, was born in 1939 and died in 1989, he wrote two poems, The Jaguar and The Thought-Fox. These are the poems that I am discussing in my essay and also what his ideas are on the poems. He also specialises in nature poems and these are what we have also been studying. The Thought-Fox is quite a different poem. It wasn't written about the fox it was written about him writing about the fox (confusing I Know!!!). The Jaguar on the other hand, was about the animal and it was describing the animal, can you tell the difference and how he likes to differ his poems "You ...read more.

At the start, he cannot think of anything to write but at the end he has created a poem. He also believes that a poem and an animal are one and the same, "A fox that is both a fox and not a fox". Another quote "The words have a body for it and the poem has give the fox somewhere to walk" in other words the poem has brought the fox to life. 'The Jaguar' however, is very much different. He is actually writing about the animal in the poem and not how he thought of what to write about the subject. With the structure, 'The Jaguar' has five verses, four lines in each verse and around nine words in each line. ...read more.

Both of the poems are quite boring after reading it a few times. Whether they are successful or not is a different matter. Ted Hughes is a very famous poet and a successful one at that. His poems are also very famous amongst other people of an older age. I do think that they are successful in the way he has written them as well as many people liking them and the one I most like best is 'The Thought-Fox' because it is easier to understand than the other one and has interesting things in it (but also some REALLY BORING ones!!!). But all in all the poems and Ted Hughes' ideas on the poems are different and somewhat strange. Other people have thought that his ideas are different, 'new' and 'Radical'. Written By Zoe Gryntus 8PC. ?? ?? ?? ?? ...read more.