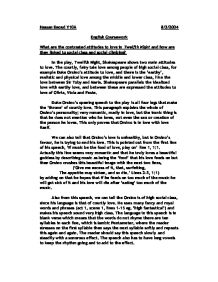 What are the contrasted attitudes to love in Twelfth Night and how are they linked to social class and social climbing?

Hassan Daoud Y10A 8/3/2004 English Coursework What are the contrasted attitudes to love in Twelfth Night and how are they linked to social class and social climbing? In the play, Twelfth Night, Shakespeare shows two main attitudes to love. The courtly, fairy tale love among people of high social class, for example Duke Orsino's attitude to love, and there is the 'earthy', realistic and physical love among the middle and lower class, like the love between Sir Toby and Maria. Shakespeare parallels the idealized love with earthy love, and between these are expressed the attitudes to love of Olivia, Viola and Feste. Duke Orsino's opening speech to the play is all four legs that make the 'throne' of courtly love. This paragraph explains the whole of Orsino's personality; very romantic, madly in love, but the ironic thing is that he does not mention who he loves, not even the sex or creation of the person he loves. This only proves that Orsino is in love with love itself. We can also tell that Orsino's love is unhealthy, but in Orsino's favour, he is trying to end his love. This is pointed out from the first line of his speech, 'If music be the food of love, play on' line 1, 1:1. Actually this line seems very romantic and that he truly loves a beautiful goddess by describing music as being the 'food' that his love feeds on but then Orsino crushes this beautiful image with the next two lines, ('Give me excess of it, that, surfeiting, The appetite may sicken, and so die.' ...read more.

Such characters like Feste, Touchstone from As You Like It and the Fool from King Lear are always making us ask the question, who is the real fool in this play? I believe in this play it is Sir Andrew and Malvolio whom are the real fools since they are two sad men who have crummy personalities; Sir Andrew acts like he knows French but only says one line (3:1 lines 73-75) and then stops as if he used up all his French. Sir Toby is a down to earth man, he is a typical example of a lower middle class guy although his rank is high socially. Sir Toby also uses a lot of sexual innuendo like 'front her, board her, woo her, assail her' which are examples of violent approaches to sex. Another example is act 1, scene 3 lines 97-99 which is a very sexual comment. He likes to drink and make many jokes, especially involving sex. His attitude to love is a lot more physical and 'earthy' then Orsino's heavenly love. We also that Sir Toby is very clever and has a way with words. For example, act 1, scene 3, lines 10-11, where 'confine' means to keep within the rules of reasonable behavior but when Sir Toby said 'I'll confine myself no finer that I am' he meant he will not dress himself better than he is dressed now. Sir Toby we also see admires Maria because of her intelligence and similarity in sexual innuendo. ...read more.

We see this in lines 149-160 and 167-168. But then Cesario replies in the same way as Olivia (161-166) to show he is compatible with her and that she is of high class too. Now we can speak about Malvolio. We can see that his attitude to love is a way to advance in society after Act 2 Scene 5 lines 24-41. He believes that it is only chance that he is a steward and not a lord ('T is but fortune; all is fortune'). We can also tell that he dreams of being served on and being a Count ('Calling my officers about me....' Lines 48-50 and also when he yells 'To be Count Malvolio!' as if it were a dream of his). We then can tell that Malvolio is a pure social climber and is to me the biggest fool of this play. In Act 5 scene 1 lines 359-361 we are surprised to hear that Sir Toby has married Maria as a reward for her help with tricking Malvolio. I think Sir Toby used that as a cover-up instead of saying that he truly loved her and that her help just added more fire to his passion for her. But Maria I think did this to catch Sir Toby's attention to show that she is clever and mischievous like he is, but I do not think she did this to socially climb but because she likes Sir Toby and his personality since his is very similar to hers. I believe her love is true. In conclusion, Twelfth Night includes many different attitudes to love and that it is linked to social climbing. ...read more.