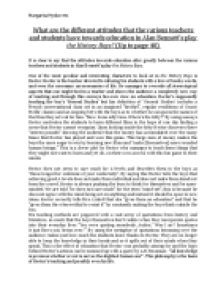 What are the different attitudes that the various teachers and students have towards education in Alan Bennetts play the History Boys?

﻿Margarita Myskovets What are the different attitudes that the various teachers and students have towards education in Alan Bennett?s play the History Boys? (Up to page 40) It is clear to say that the attitudes towards education alter greatly between the various teachers and students in Alan Bennett?s play the History Boys. One of the most peculiar and interesting characters to look at in the History Boys is Hector. Hector is the teacher devoted to infusing his students with a love of books, words, and even the necessary un-necessaries of life. He manages to override all stereotypical aspects that one might find in a teacher and shows the audience a completely new way of teaching and through this conveys his own view on education. Hector?s supposedly teaching the boy?s ?General Studies? but his definition of 'General Studies' includes a French conversational class set in an imagined ?brothel?, regular renditions of Gracie Fields' classics and an ongoing bet with the boys as to whether he can guess the names of the films they act out for him. ?Now. Some silly time. Where?s the kitty?? By using moneys Hector motivates the students to learn different films in the hope of one day finding a scene that Hector cannot recognise. Upon looking inside the kitty Hector discovers there ?sixteen pounds? showing the audience that the money has accumulated over the many times that Hector has played and won this game. ...read more.

Similarly to Hector Irwin pushes the boys to ?flee the crowd? and say more than just the status quo answer. Although unlike Hector, Irwin teaches this with a different aim in mind, getting the boys into Oxbridge. Irwin takes what can be seen as nonsense and turns it into a fully correct historical point ?he would one day demonstrate on television that those genuinely caught napping by the attack on Pearl Harbour were the Japanese and that the real culprit was President Roosevelt? Through thoughts such as these Irwin teaches the boys that you do not have to say exactly what you have been taught and how you have been taught it. He is notorious for ? settling on some hitherto unquestioned historical assumption and then proving the opposite.? Irwin doesn?t care about history that is correct but instead history that is entertaining, ?history nowadays is not a matter of conviction. It?s a performance. It?s entertainment. And if it isn?t make it so?. Irwin genuinely believes that ?the wrong end of the stick is the right one? and that truth has nothing to do with answering a question. ? ? But it?s all true.? ?What has truth got to do with it? What has truth got to do with anything??? Irwin generally attempts to teach enrichment in a functionalist way ? a question has a front door and a back. ...read more.

?I did believe in god. No one else does.? This pleases Hector as it means that Scripps does not follow the crowd. Scripps in general does not seem to be lenient towards any type of education and so finds it easy to get the most out of both Hector?s and Irwin?s lessons. This gives him an edge in achieving a place in Oxbridge and although he is not the smartest in the class, like Dakin, he also has no trouble getting through the exams, like Rudge. Scripps tends to question everything he is told and does not accept things just as they are told to him, this side of his character is very appealing to both Hector and Irwin. Even though he is very religious he questions religion itself ?they recon you have to love God because God loves you. Why??. Through this continuous questioning Scripps is developed into a very intellectual character that will not accept things as the truth unless he is proved it to himself to be the truth. Overall all the characters in Alan Bennett?s play the History Boys have a different approach towards education. Some, such as Rudge and Mrs. Lintott, prefer functionalism while others, like Hector are more lenient towards enrichment although many characters are a mix of both, a primary example being Irwin. Through presenting the characters with different views towards education Alan Bennett manages to make the audience question the educational system and their own views towards education. ...read more.