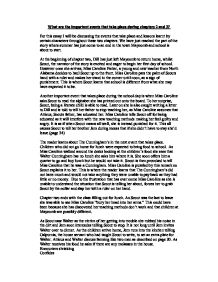 What are the important events that take place during chapters 2 and 3?

What are the important events that take place during chapters 2 and 3? For this essay I will be discussing the events that take place and lessons learnt by certain characters throughout these two chapters. We have just reached the part of the story where summer has just come to an end in the town Maycomb and school is about to start. At the beginning of chapter two, Dill has just left Maycomb to return home, whilst Scout, the narrator of the story is excited and eager to begin her first day of school. However once she arrives, Miss Caroline Fisher, a young and new teacher from North Alabama decides to haul Scout up to the front. ...read more.

Miss Caroline tells Scout off for being educated as it will interfere with the new teaching methods making her feel guilty and angry. It is as if when Scout means all well, she is instead punished for it. This all causes Scout to tell her brother Jem during recess that if she didn't have to stay she'd leave (page 24) The reader learns about The Cunningham's in the next event that takes place. Children who did not go home for lunch were expected to bring food to school. As Miss Caroline walked around the desks looking at the children's food she sees that Walter Cunningham has no lunch she asks him where it is. ...read more.

As Scout was the last to leave she was able to see Miss Caroline "bury her head into her arms." This could have been because she has discovered her teaching methods don't work and that children at Maycomb are possibly different. As Scout saw Walter as the victim of her getting into trouble she rubbed his noise in the dirt and Jem soon intercedes telling Scout to stop. It is not long until Jem invites Walter over to dinner. As the children arrive home, Jem runs into the kitchen telling Calpurnia, the house servant who had taught Scout to write, to set an extra plate for Walter. Atticus and Walter discuss farming like two men as described on page 30. As Walter receives his food he asks if there are any molasses in the house. Encounters shrieking Confides ...read more.