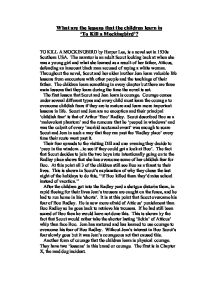 What are the lessons that the children learn in 'To Kill a Mockingbird'?

What are the lessons that the children learn in 'To Kill a Mockingbird'? TO KILL A MOCKINGBIRD by Harper Lee, is a novel set in 1930s Southern USA. The narrator is an adult Scout looking back at when she was a young girl and what she learned as a result of her father, Atticus, defending an innocent black man accused of raping a white woman. Throughout the novel, Scout and her older brother Jem learn valuable life lessons from encounters with other people and the teachings of their father. The children learn something in every chapter but there are three main lessons that they learn during the time the novel is set. The first lesson that Scout and Jem learn is courage. Courage comes under several different types and every child must learn the courage to overcome childish fears if they are to mature and learn more important lessons in life. Scout and Jem are no exception and their principal 'childish fear' is that of Arthur 'Boo' Radley. Scout described Boo as a 'malevolent phantom' and the rumours that he 'peeped in windows' and was the culprit of every 'morbid nocturnal event' was enough to scare Scout and Jem in such a way that they ran past the 'Radley place' every time their route went past it. Their fear spreads to the visiting Dill and one evening they decide to 'peep in the window...to see if they could get a look at Boo'. ...read more.

Scout has no explanation for Miss Maudie's reaction saying simply 'that was just Miss Maudie'. What the children learn is that courage also extends to peoples personality and reactions, not just their actions. Miss Maudie has the courage to get on with her life and look at the good points even though all her possessions, bar her sun hat, have been destroyed. This teaches the children that a strong personality is worth a lot more than a strong bicep and they will need this lesson in the latter part of the book. The second example of spiritual or emotional courage is Mrs Dubose's struggle against her morphine addiction and she wanted to die as 'free as the mountain air'. Mrs Dubose knew she was going to die but refused to die addicted to morphine, even if it meant being 'conscious to the last'. To a person who didn't have her courage it would been 'all right to take anything to make it easier, but it wasn't all right for her'. This shows that she was willing to put up with frequent pain to uphold her believes. This is what Atticus describes as 'real courage'. He tells the children that courage isn't ' a man with a gun in his hand' but in fact, it is when you are in a no win situation but you 'see it through no matter what'. This also makes a cross reference to Atticus' and how he defends Tom Robinson in the 2nd part of the book, even though he is 'licked before he begins'. ...read more.

At first, it is obvious that Scout didn't understand what racial prejudice because she doesn't understand the meaning behind the word 'nigger-lover' and likens it to a childish insult. By the end of the book, she has grown up and learned that people can be prejudice and has managed to get rid of many of her prejudices. The Mockingbird is the motif that represents prejudice against innocent people. The children are told that all a mockingbird does is sing, something that causes no harm to other people explaining why it is a sin to kill it; it is innocent. Both Boo and Tom are mockingbirds. They both try to help others and are persecuted and outcasted for doing so. Both Tom and Boo are innocent and although only Tom dies as a result of the prejudice, in terms of him being a mockingbird, he has been 'killed'. The motif also links justice and childhood together: Both justice and the children's childhood innocence are killed when the jury bring back the guilty verdict on Tom, a mockingbird. All the lessons that the children learn can be interlinked in some way. The Finch family need courage to stand up to the prejudice of the mob/Maycomb. Maycomb as a society doesn't have enough courage to stand up to the prejudice so the guilty verdict is returned. Also, if you 'climb into some one's skin and walk around in it' you can then empathise with that person. That will then in turn cause you to loose any prejudice you had against that person. ...read more.