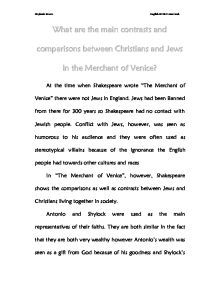 What are the main contrasts and comparisons between Christians and Jews in the Merchant of Venice?

What are the main contrasts and comparisons between Christians and Jews in the Merchant of Venice? At the time when Shakespeare wrote "The Merchant of Venice" there were not Jews in England. Jews had been Banned from there for 300 years so Shakespeare had no contact with Jewish people. Conflict with Jews, however, was seen as humorous to his audience and they were often used as stereotypical villains because of the ignorance the English people had towards other cultures and races In "The Merchant of Venice", however, Shakespeare shows the comparisons as well as contrasts between Jews and Christians living together in society. Antonio and Shylock were used as the main representatives of their faiths. They are both similar in the fact that they are both very wealthy however Antonio's wealth was seen as a gift from God because of his goodness and Shylock's wealth would have been seen as dishonest as he got it through usury, which was forbidden by Christians. Usury was seen as greed as they charged interest on money they leant, it was not in good faith as a bond between two people to ask for something as assurance in case they did not pay back the money on time, they would have been expected to have trust in the person they helped like Antonio did. ...read more.

When Antonio realises what he had put the Jews through, though his personal suffering, he is kind as he knows how it is to be treated in this way. In contrast Shylock knows what it means to suffer but still he uses his power for distress to the Christians and did not learn from his experiences as the under-dog. Antonio and Shylock are similar as well to how they use their power. At the beginning Antonio punishes the Jews, namely Shylock, because of his higher social standing, this is imitated by Shylock, when he gets power he persecutes Antonio, as a way of getting to the Christians. Shylock makes a famous speech, when confronted with Solerio and Solanio's taunting, about the commonality of Jews and Christians. "Shylock : If you pick us do we not bleed? If you tickle do we not laugh? If you poison us do we die?" He talks about the natural afflictions which are suffered by everyone, Jew and Christian alike. "Shylock : ...warmed and cooled by the same winter and summer as a Christian is? He does this first to gain mutual sympathy. Then he talks about how the Christians make constant attacks on Jews to make them feel guiltily about how they treated his people. ...read more.

Shakespeare tried to show the revolutionary view that Jews and Christians were as bad and as good as each other. This was in contrast to what the audience would have expected, a clean cut line between the Christian "Good Guy" and the Jewish villain. Christians and Jews had a lot in common and still do. The origins of their faith are the same, both believe in the Old Testament scriptures, they both have families and relationships with other people, portrayed by Shylocks relationship with his daughter, Antonio and Bassanio's friendship and Portia's marriage to Bassanio, and they both are affected by the same things, touch, taste, sound, sight, smell. No matter what their religion they are both the same on the outside. "I am a Jew. Hath not a Jew eyes? Hath not a Jew hands, organs, dimensions, senses, affections, passions? Fed with the same food, hurt with the same weapons, subject to the same diseases healed by the same means, warmed and cooled by the same winter and summer, as a Christian is? If you prick us do we not bleed? If you tickle us do we not laugh? If you poison us do we not die? And if you wrong us shall we not revenge? If we are like you in the rest, we will resemble you in that." ?? ?? ?? ?? Stephanie Moore English GCSE Coursework ...read more.