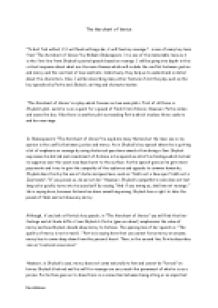 What are the main themes in &quot;The Merchant of Venice&quot;?

﻿The Merchant of Venice ?To bait fish withal; if it will feed nothing else, it will feed my revenge?? is one of many key lines from ?The Merchant of Venice? by William Shakespeare. It is one of the memorable lines as it is the first line from Shylock?s pivotal speech based on revenge. I will be going into depth in this critical response about what are the main themes which will include the conflict between justice and mercy and the contrast of love and hate. Collectively, they help us to understand in detail about the characters, Also, I will be describing many other features from the play such as the key speeches by Portia and Shylock, setting and characterisation. ?The Merchant of Venice? is a play which focuses on two main plots. First of all there is Shylock?s plot, were he is on a quest for a pound of flesh from Antonio. However, Portia comes and saves the day. Also there is another plot surrounding Portia which involves three caskets and her marriage. In Shakespeare?s ?The Merchant of Venice? he explores many themes but the main one in my opinion is the conflict between justice and mercy. As in Shylock?s key speech where he is putting a lot of emphasis on revenge by using rhetorical questions aimed at him being a Jew. Shylock expresses his hatred and resentment of Antonio in his speech as all of his feelings which he had to suppress over the years now have burst to the surface. ...read more.

Shylock is a money-lending Jew, and for these two reasons he is very much disliked and hated by most in the plot. Throughout the plot Shylock is often associated with devil or animal imagery. ?An inhuman wretch, incapable of pity, void and empty from any dram of mercy.? This is when the Duke is describing Shylock as being un-human and will only show a small measure of mercy. Also, in Shylock?s key speech - the Duke is correct ? as he shows no mercy what so ever to Antonio as he thinks that revenge is more important than being merciful. However, at the end of the plot Shylock neither gets his pound of flesh or his three thousand ducats back. As a matter of fact he has to sign all of which he owns over to Jessica and Lorenzo, and he also must promise to become a Christian. By this point Shylock has lost everything and is totally defeated. Then there is Portia who is another important character in ?The Merchant of Venice.? Portia is a very intelligent and beautiful woman who falls in love with Bassanio, However, her father has planned a test with three caskets and whoever chooses the correct casket is allowed to marry Portia. Later she dresses up as a lawyer in the courtroom scene and saves Antonio?s life. At the end of the play Portia is happy as she and Bassanio ?live happily ever after.? One of the central themes in ?The Merchant of Venice? is the contrast between love and hate. ...read more.

Also on the gold casket the inscription says, ?Who chooseth me shall gain what many men desire.? This would suggest that Portia?s father has an opinion that men do not deserve the love of Portia. However, he puts the picture of Portia in the least expected casket; this would be the lead casket. The inscription on this casket reads, ?who chooseth me must give and hazard all the hath.? He is saying here that if you choose this casket you must go through and put up with what might ever come your way with Portia, this might put some men off picking it as it sounds negative and so does the fact it is in the lead casket. So overall, Portia?s father does not go for the obvious he went for the least obvious which is what superficiality is all about. In my opinion to conclude the question in which I chose the main theme is the conflict between justice and mercy for many reasons I will briefly state. First of all Portia who is one of the main characters, her key speech was based around mercy. Then if you compare that to Shylock?s, another main character, his speech was based around revenge. So these two most famous speeches are based around the main theme. Also at the end of the play, in my opinion Shylock deserved what he got so justice was served. Justice and mercy is also relevant in today?s society as the quality of mercy is not dead. It is not dead as people still believe that showing mercy to others is still worthy of praise and should be respected. KerrGibson. ...read more.