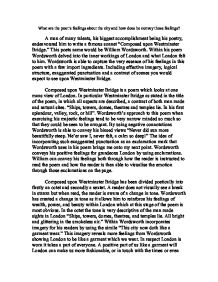 What are the poet's feelings about the city and how does he convey those feelings? (Composed upon Westminster Bridge)

What are the poet's feelings about the city and how does he convey those feelings? A man of many talents, his biggest accomplishment being his poetry, endeavoured him to write a famous sonnet "Composed upon Westminster Bridge." This poets name would be William Wordsworth. Within his poem Wordsworth delved into the inner workings of London and what London felt to him. Wordsworth is able to capture the very essence of his feelings in this poem with a few import ingredients. Including effective imagery, logical structure, exaggerated punctuation and a contrast of scenes you would expect to see upon Westminster Bridge. Composed upon Westminster Bridge is a poem which looks at one mans view of London. In particular Westminster Bridge as stated in the title of the poem, in which all aspects are described, a contrast of both man made and natural sites. "Ships, towers, domes, theatres and temples lie. In his first splendour, valley, rock, or hill". Wordsworth's approach to this poem when exercising his majestic feelings tend to be very narrow minded so much so that they could be seen to be arrogant. ...read more.

It appears that William is a great over of personification within Composed upon Westminster Bridge as he uses it many a time. In his octet London is clearly personified "A sight so touching in its majesty: This city now doth like a garment, wear". This use of personification helps to convey Wordsworth's feelings that London is so glorious, powerful and even spiritual that it can come alive. It has its own emotion to generate upon others as it has on Wordsworth himself. There is an idea that London in some respect is spiritual as "This City" is portrayed as anointed by God to represent his kingdom on Earth. There as also many spiritual connotations running throughout the poem to allow Wordsworth to convey his feelings of London being religious "Temple, God and Soul" The tone is then changed in the sextet, where it's as if Wordsworth's speech of celebration is repeated, but this time using a contrast of the natural aspects of London. "In his first splendour valley, rock or hill." ...read more.

Wordsworth believes this is in fact how London works together through day and night. Wordsworth shows this through his sonnet by making it songlike with a delicate rhythm. This rhythm being rhymes of three "fair, wear, bear, by, lie and shy." Wordsworth conveys his feelings of scenic beauty and architectural marvels in London by appealing to his reader's senses of sight, touch, taste, smell, and hearing. He makes one visualize each mighty scene so perfect, until you yourself believe you've never seen a calm so deep or sun more beautifully deep than in London. "....All bright and glittering in the smokeless air." Here appealing to your sight. By appealing to our sense of hearing Wordsworth is then able to convey his love of solitude in London in the early morning away from the hustle and bustle of London in afternoon. "The beauty of the morning; silent and bear." As a whole I found this poem very entertaining which runs along with its theme as London is suppose to be entertaining. It also helps young readers of today remember our city as it once was, and although today London looks significantly different it still has many of the glorious sparks that's have been described in London in 1803. ...read more.