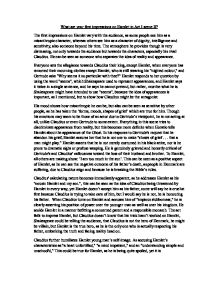 What are your first impressions on Hamlet in Act I scene II?

What are your first impressions on Hamlet in Act I scene II? The first impressions on Hamlet vary with the audience, as some people see him as a misanthropic character, whereas others see him as a character of dignity, intelligence and sensitivity, also someone beyond his time. The atmosphere he provides though is very distressing, not only towards the audience but towards the characters, especially his rival Claudius. He can be seen as someone who separates the idea of reality and appearance. Everyone sets the allegiance towards Claudius their king, except Hamlet, when everyone has removed their mourning clothes except Hamlet, who is still wearing his "nighted colour," and Gertrude asks "Why seems it so particular with thee?" Hamlet responds to her question by using the word "seems", which Shakespeare used to represent appearances, and Hamlet says it twice in a single sentence, and he says he cannot pretend, but rather, must be what he is. Shakespeare might have intended to use "seems", because the idea of appearances is important, as I mentioned, but to show how Claudius might be the antagonist. ...read more.

He scolds Hamlet in a manner befitting a concerned parent and a responsible monarch. The act fails to impress Hamlet, but Claudius doesn't know that his trick hasn't worked on Hamlet, Shakespeare could be telling the audience, that Claudius is not the hero of Denmark, he might be villain, but Hamlet is the true hero, as he is the only one who is actually respecting his father, embarking the truth and facing reality head on. Claudius further humiliates Hamlet young man's self-image. As accusing Hamlet's characteristics as:"a heart unfortified," "a mind impatient," and an "understanding simple and unschool'd," This could be true for Hamlet, as he is being quite spoiled, yet it is understandable, as he has lost someone close to him. So, we see that Claudius is being very desperate into getting rid of Hamlet's depression, as this could unravel the truth of Claudius. Claudius even defines Hamlet as inadequate to the task of being king 'It shows a will most incorrect to heaven'. This is not true, as Hamlet, has more capabilities than even Claudius for being a king, because he understands what is happening in Denmark and he is also the rightful heir for it. ...read more.

When Bernardo, Marcellus, and Horatio tells Hamlet of news of the Ghost, Hamlet excitedly questions them as to the details of the sighting and hopes it is true, and that the Ghost is "honest" rather than a "goblin dam'd." The Ghost's misery reinforces Hamlet's belief that the Ghost is serious. After Hamlet's conversation with Horatio, Hamlet's sardonic sense of humour disguises his own aching melancholy and nagging suspicion that some "foul play" is afoot. Overall, we learn a lot about Hamlet in the play, his character is developed, and his journey is about to begin. People see him as someone who is misanthropic, I do not believe that, he is, misanthropic, but to some extent, yet he is an amiable misanthrope. He is someone who has accepted reality and tries to endure it. Other people see him as sensitive and religious, I do not believe some of that, as he does not respect mother entirely, even though he has a reason, he must not insult her, as she has given him birth. I believe Hamlet is not only a tragic hero, but someone a bit beyond that, someone who people can relate with, a hero for Denmark and someone with human qualities. ...read more.

This is an interesting essay, which shows a good knowledge of the issues raised in the scene but needs to consider aspects of the text in a little more detail to attain a top rating. ****