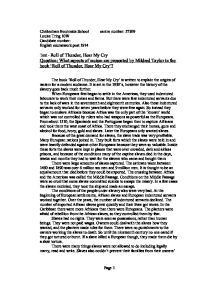 What aspects of racism are presented by Mildred Taylor in the book 'Roll of Thunder, Hear My Cry'?

Cheltenham Bournside School centre number: 57309 Louise Tring 10W Candidate number: English coursework post 1914 Text - Roll of Thunder, Hear My Cry Question: What aspects of racism are presented by Mildred Taylor in the book 'Roll of Thunder, Hear My Cry'? The book 'Roll of Thunder, Hear My Cry' is written to explain the origins of racism for a modern audience. It is set in the 1930`s, however the history of the slavery goes back much further. When Europeans first began to settle in the Americas, they used indentured labourers to work their mines and farms. But there were few indentured servants due to the lack of wars in the seventeenth and eighteenth centuries. Also these indentured servants only worked for seven years before they were free again. So instead they began to enslave Africans because Africa was the only part of the 'known' world which was not controlled by rulers who had weapons as powerful as the Europeans. From about 1510, the Spaniards and the Portuguese began then to capture Africans and took them the west coast of Africa. There they exchanged their horses, guns and alcohol for food, ivory, gold and slaves. Later the Europeans only wanted slaves. Because of the great demand for slaves, the slave trade was very profitable. Many European nations joined in. They built forts which the slaves were held in and were heavily defended against other Europeans because they were so valuable. Inside these forts the slaves were kept in places that were over crowded, dark and airless prisons, and because of the conditions many of the captive slaves died in the days, weeks and months they had to wait for the slavers who came and bought them. There were large amounts of slaves captured. The estimate taken between 1490 and 1890 was over 6 million women and 9 million men. It is thought to be an equal amount that died before they could be exported. ...read more.

Right now Stacey and Jeremy get along fine, but in a few years he'll think of himself as a man, but you'll probably still be a boy to him. And if he feels that way, he'll turn on you in a minute". Papa has had experience with what the white people do to the black people, and that white people as they grow older think themselves as being better than black people, even if they don't when they are younger. They learn they can take control and be in charge of them. After T.J. is rejected by the Logan children for his betrayal of Mama, T.J. turns his back on the black community and seeks friends with the older white boys. "Got me better friends than y'all. They give me things and treat me like I'm a man and ... and they white too." This shows that he thinks a lot about white people, and respects them even though they do terrible things to people of his own race. I think that T.J. feels that he is safe now that he has white friends to protect him. But other people don't think that he is very safe. Jeremy is worried about how his brothers R.W. and Melvin are treating T.J. "They bring T.J. by the house a couple times when Pa wasn't home. They treated him almost friendly like, but when he left they laughed and talked 'bout him - called him names." This proves that Jeremy's brothers don't actually want T.J. as a friend; they just use him as entertainment, while he tried to impress them. They think it funny and don't treat him with any respect. T.J. fails to impress the Logan children with his new friends. He goes off with them to get the pearl-handled pistol, clearly upset that the Logans are not envious. Later that night he appears at the Logan's house begging for help because the Sims have beaten him. ...read more.

The Klansmen regarded the Reconstruction governments as hostile and oppressive. They also generally believed in the innate inferiority of blacks and therefore mistrusted and resented the rise of former slaves to a status of civil equality and often to positions of political power. Thus, the Klan became an illegal organization committed to destroying the Reconstruction governments from the Carolinas to Arkansas. Attired in robes or sheets and wearing masks topped with pointed hoods, the Klansmen terrorized public officials in efforts to drive them from office and blacks in general to prevent them from voting, holding office, and otherwise exercising their newly acquired political rights. It was customary for the Klansmen to burn crosses on hillsides and near the homes of those they wished to frighten. When such tactics failed to produce the desired effect, their victims might be flogged, mutilated, or murdered. These activities were justified by the Klan as necessary measures in defence of white supremacy and the inviolability of white womanhood. Racism attacks and abuse, include Racist jokes, imitating foreign accents, teasing about religious customs like what they wear and eat, damaging property, but in some cases it is more violent and the victim is beaten. According to a major survey from the internet the results from people all over Britain most believe they live in a racist society, and in 2000-2001 police recorded 25,100 racial offences. But it is thought over double weren't taken to the police because the victims was too scared to do so. I think that a lot of racism is due to people having weaknesses or faults of their own and pick on some other group to take out their frustrations and to blame others for problems they have, like what they look like themselves or their family traditions. Some people are ignorant and don't understand different racial and religious groups ways of living. I think it is unfair to pre-judge people when you don't know the facts. Page 1 ...read more.