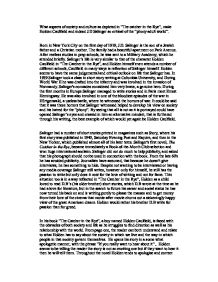 What aspects of society and culture as depicted in The catcher in the Rye, make Holden Caulfield and indeed J.D Salinger so critical of the phony adult world.

What aspects of society and culture as depicted in "The catcher in the Rye", make Holden Caulfield and indeed J.D Salinger so critical of the "phony adult world". Born in New York City on the first day of 1919, J.D. Salinger is the son of a Jewish father and a Christian mother. The family had a beautiful apartment on Park Avenue. After restless studies in prep schools, he was sent to a Military Academy, which he attended briefly. Salinger's life is very similar to that of the character Holden Caulfield in "The Catcher in the Rye", and Holden himself even attends a number of different schools, Caulfield in many ways is reflection of Salinger himself. Holden seems to have the same judgemental and critical outlook on life that Salinger has. In 1939 Salinger took a class in short story writing at Columbia University, and During World War II he was drafted into the infantry and was involved in the invasion of Normandy. Salinger's comrades considered him very brave, a genuine hero. During the first months in Europe Salinger managed to write stories and in Paris meet Ernest Hemingway. He was also involved in one of the bloodiest episodes of the war in H�rtgenwald, a useless battle, where he witnessed the horrors of war. It could be said that it was these horrors that Salinger witnessed helped to develop his view on society and his hatred for the "phony". By seeing that all is not as it is portrayed could have opened Salinger's eyes and created in him an alternative mindset, that is furthered through his writing, the best example of which would yet again be Holden Caulfield. Salinger had a number of short stories printed in magazines such as Story, where his first story was published in 1940, Saturday Evening Post and Esquire, and then in the New Yorker, which published almost all of his later texts. ...read more.

pass at him. Maybe he just likes patting guys' heads as they sleep. This is really the only time in the novel where Holden actually considers a positive side. This event does not constitute a significant change. Holden's actions toward another one of his teachers, Mr. Spencer's his history teacher, Holden feels Mr. Spencer is a "phony", someone of no importance. Holden goes to visit Mr and Mrs Spencer after being expelled and whilst there he finds the Spencer's house somewhat depressing, smelling of elderly people. Mr. Spencer sits in a ratty old bathrobe, and asks Holden to sit down. Holden tells him how Dr. Thurmer(the Headmaster of Pencey) told him about how "life is a game" and you should "play it according to the rules" when he expelled him. Mr. Spencer tells him that Dr. Thurmer was correct, and Holden agrees with him, but does not actually agree with him. Holden tells Mr. Spencer that his parents will be upset, for this is his fourth private school so far. Spencer then tells Holden that he failed him in History because he knew nothing, and even reads his exam essay about the Egyptians to him. At the end of the exam, Holden left a note for Mr. Spencer, admitting that he is not interested in the Egyptians, despite Spencer's interesting lectures, and that he will accept if Mr. Spencer fails him. As Holden and Mr. Spencer continue to talk, Holden's mind wanders and he begins to think about the ducks in Central Park. Even Holden's style of narration reveals this lack of any coherent vision. He admits that he cannot concentrate on any particular topic, thinking about Central Park being frozen over while Mr. Spencer lectures him. Despite not having any interest in what Mr Spencer is say he humours and flatters him by agreeing with him. Another aspect of life that Holden does not respect, yet on some level yearns for, is that of married life. ...read more.

Holden can see that no matter how good a person you are, no matter what sort of lifestyle you live, there is just as much a chance of depressions, death and hardship. This could very well lead to his criticism of the "phonies", who put so much value in superficial and pointless things, that they forget what matters in life. Holden is a person, so too was Salinger, who is not capable of dealing with the ideology of the time, and views the world and its inhabitants as fake, convincing themselves they are happy, when they know deep down that they are not. Holden values people that act the way the really feel rather than being pretentious. He has negative feelings for anyone that acts otherwise. Throughout the book, Holden talks about being tired of "phonies" and wanting people to be honest. Of the many times Salinger shows these feelings, one is when Holden is discussing living out west in his own place. He hates "phony" people so much that he said, "If anybody tried to do anything "phony", they couldn't stay". Holden is so repulsed by this idea of the "phony" that he envisions a fantasy land in which only he and the innocent can live, he does not want any of the Stadlater types with their two personalities, any adoring teenagers worshipping pointless "fads". Holden wants a blissful land where he can live a life of innocence, a land with none of the pressures of sexual maturity or the fears of adulthood, one where everyone one is open and truthful. This could very well have been one of Salinger's own fantasies, and the pressures of the "phony" world had built up so much that Salinger could no longer take it and this could be one of the major reasons for his becoming a recluse and for Holden's checking into a home in the end of the novel, neither Holden Caulfield nor J.D Salinger could deal with their phobias and so both were removed from the public world. ...read more.