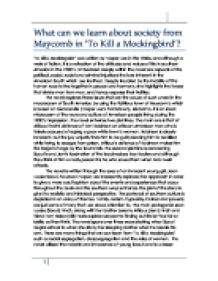 What can we learn about society from Maycomb in To Kill a Mockingbird?

What can we learn about society from Maycomb in 'To Kill a Mockingbird'? 'To Kill a Mockingbird' was written by Harper Lee in the 1960s, and although a work of fiction, it is a reflection of the attitudes and values of life in southern America in the 1930's. Embedded deeply within the novel are aspects of the political, social, racial and criminal injustices that are inherent in the American South which Lee loathed. Deeply troubled by the inability of the human race to live together in peace and harmony, she highlights the forces that divide man from man, and hence exposes their frailties. The novel explores these issues that are the cause of such unrest in the macrocosm of South America by using the fictitious town of Maycomb which is based on Monroeville (Harper Lee's hometown), Alabama, it is an ideal microcosm of the ways and culture of American people living during the 1930's Depression. The novel entwines two plot lines. The main one is that of Atticus Finch's defence of Tom Robinson an African-American man who is falsely accused of raping a poor white town's woman. Robinson is clearly innocent, but the jury unjustly finds him to be guilty leading him to be killed while trying to escape from prison. Atticus's defence of Robinson makes him the target of rage by the towns folk. ...read more.

She is a true optimist and even when her house burns down she says, "lucky it didn't burn down the whole town." She also acts as a friend for Scout when Jem wants to be alone. However wrong it is in today's society racism was part of everyday life in Maycomb. The lowest of 'white trash' like the Ewells was still higher in the social hierarchy than the highest of blacks, like Tom Robinson. As Scout says the only thing that makes Bob superior to blacks is "that when scrubbed with lime soap in very hot water his skin is white." The only reason why Tom ended up in court was because the colour of his skin and because he was against a white women, he was going to lose. Throughout the court case we see examples of Tom's impeccable manners and respect for court and by contrast we see Bob treating the case like a joke, like when he is asked if he was Mayella's father he replies, "Well if I ain't I'm stuck with her now." Although Bob was a leech on society who lived on benefits and made no effort to work he was favoured over a hard working man who although handicapped still worked to earn a honest living because he was white. The language used is important, Bob speaks in a nasty way with no respect, he points his finger and uses improper language like 'fore' meaning before and 'nigger nest' which is derogatory term for a coloured settlement. ...read more.

Even Atticus says "She was the bravest person I knew." On the surface, Harper Lee's novel appears to be a simple tale of racial prejudice in the search for justice however it's far more; in fact she gives the reader a fascinating and engrossing insight into human behaviour in times of hardship. She cleverly unveils through the narrating character Scout the hypocrisy of some people in their attitudes toward others who are of a different colour, economic status, gender and religion as well as people with disabilities. Although, her novel is set in a small fictional American town during the great depression, the human traits that she writes about are becoming ever increasing in present day society. Today's recession here may be a far cry from the American Depression but the down turn in our economic climate has similar overtones where the disadvantaged and "different" members of the society bear greater pain. A prime example is some people's attitude towards migrant workers from Eastern Europe and Asia; who are no longer as tolerated or looked upon sympathetically. It seems that when people are subjected to hardship they tend to become marginalised and this fuels greater prejudice against them. Through her novel 'To Kill a Mockingbird' Harper Lee sends an important moral message- all types of prejudice must be fought and overcome regardless of where they are present or how tough the task might seem at the time. ?? ?? ?? ?? 1 ...read more.