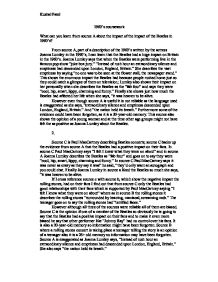 From source A, part of a description of the 1960’s written by the actress Joanna Lumley in the 1990’s, I can learn that the Beatles had a huge impact on Britain in the 1960’s. Joanna Lumley says that when the Beatles were performing live in the famous pop show “juke box jury.” “Instead of rush hour an extraordinary silence and emptiness had descended upon London, England, Britain.” She describes the vast emptiness by saying “no one was to be seen at the flower stall, the newspaper stand.” This shows the enormous impact the Beatles had because people rushed home just so they could catch a glimpse of them on television; Lumley also shows their impact on her personally when she describes the Beatles as the “fab four” and says they were “cool, hip, smart, lippy, charming and funny.” Finally she shows just how much the Beatles had affected her life when she says, “it was heaven to be alive.

However even though source A is useful it is not reliable as the language used is exaggerated as she says, “extraordinary silence and emptiness descended upon London, England, Britain.” And “the nation held its breath.” Furthermore some of the evidence could have been forgotten, as it is a 30-year-old memory. This source also shows the opinion of a young woman and at the time other age groups might not have felt the as positive as Joanna Lumley about the Beatles.

Source C is Paul MacCartney describing Beatles concerts; source C backs up the evidence from source A that the Beatles had a positive impact on their fans. In source C Paul MacCartney says “I felt I knew what they were on about” and in source A Joanna Lumley describes the Beatles as “fab four” and goes on to say they were “cool, hip, smart, lippy, charming and funny.” In source C Paul MacCartney says it was never as crazy as they say it was” he said, “they’d only want an autograph and you could chat. Finally Joanna Lumley in source a liked the Beatles so much she says, “it was heaven to be alive.

However although all three of the sources were reliable all of them are biased. Source C is the opinion if one of a member of the Beatles so obviously he is going to say that the Beatles had a positive impact on their fans and to make it even more biased he say that other performer like “Johnny Ray” had no control over his fans. It is also a 20-year-old memory so information might have been forgotten. Source B where a rolling stones concert is taking place a teenager telling the story is an opinion of a teenager also it is a 26+ old memory so information may have been forgotten. Source A is exaggerated as Joanna Lumley says, “Instead of rush hour an extraordinary silence and emptiness had descended upon London, England, Britain.”  She also says “the nation held its breath.”