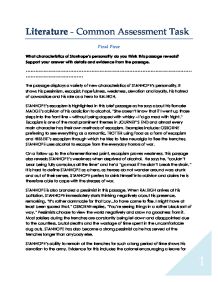 What characteristics of Stanhopes personality do you think this passage reveals? Support your answer with details and evidence from the passage.

I might have at least been spared that." OSBORNE replies, "You're seeing things in a rather black sort of way." Pessimists choose to view the world negatively and draw no goodness from it. Most soldiers during the trenches are constantly being let down and disappointed due to the countless, brutal deaths and the wastage of time spent in the uncomfortable dug outs. STANHOPE has also become a strong pessimist as he has served at the trenches longer than anybody else. STANHOPE's ability to remain at the trenches for such a long period of time shows his devotion to the army. Evidence for this includes the colonel encouraging a leave for STANHOPE, to which he replies, "He thinks I'm in such a state that I want a rest, is that it?!" The tone of this remark implies that STANHOPE is dedicated to serving the army and will stay until the war ends. ...read more.

He was asked by RALEIGH's father to care for RALEIGH and STANHOPE said, "I rather liked the idea of looking after him" which shows STANHOPE's happiness of being appointed the guardian of RALEIGH. Lastly, this passage reveals STANHOPE's hopefulness to return from the trenches a hero and marry MADGE, his fianc�e. He says that his hopefulness is fading due to RALEIGH's arrival. STANHOPE said to OSBORNE, "I've hoped that all the time... [I'd] get fit and then go back to her." OSBORNE replies, "And so you can" to which STANHOPE bitterly says, "If RALEIGH had gone to one of those other one thousand eight hundred companies." Due to RALEIGH being MADGE's sister, STANHOPE fears that RALEIGH will write home and reveal his addiction to alcohol and how he had changed into a "bad" person during his time in the trenches. The army consists mainly of men, who also share their dreams of returning to their loved ones, and STANHOPE is no different. ?? ?? ?? ?? ...read more.