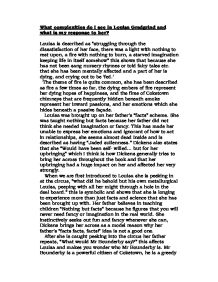 What complexities do I see in Louisa Gradgrind and what is my response to her?

What complexities do I see in Louisa Gradgrind and what is my response to her? Louisa is described as "struggling through the dissatisfaction of her face, there was a light with nothing to rest upon, a fire with nothing to burn, a starved imagination keeping life in itself somehow" this shows that because she has not been sang nursery rhymes or told fairy tales etc. that she has been mentally affected and a part of her is dying, and crying out to be 'fed.' The theme of fire is quite common, she has been described as fire a few times so far, the dying embers of fire represent her dying hopes of happiness, and the fires of Coketown chimneys that are frequently hidden beneath smoke represent her inward passions, and her emotions which she hides beneath a passive fa�ade. Louisa was brought up on her father's "facts" scheme. She was taught nothing but facts because her father did not think she needed imagination or fancy. ...read more.

After she is caught peeking into the circus her father repeats, "What would Mr Bounderby say?" this affects Louisa and makes you wonder who Mr Bounderby is. Mr Bounderby is a powerful citizen of Coketown, he is a greedy capitalist and his name is slang for 'cad' which is what he is. He is attracted to Louisa and wants to marry her. He repulses Louisa and when he kissed her she looked away and rubbed her cheek for 5 minutes, when her brother, Tom says "You'll rub a hole in your face" she says that if he cut it out with a penknife, she wouldn't cry. Louisa is very close to Tom, and at first he is the only person she cares about, and she decides to marry Mr Bounderby because of him. She talks to Tom about what she feels and opens up to him and explains what she feels, she also talks to him about fancy, which she wouldn't do to anybody else, she also talks about how she feels about Sissy to him. ...read more.

She is chaffing against her upbringing and has a "starved imagination" was can see this from when we first meet her and Dickens describes her as "Pretty. Would have been self willed but for her bringing up" which I think is very true, her father's method of teaching children has left her almost dead mentally and tired and she says "I am tired." She hides her emotion that is making her tired and depressed, she seems as if she daydreams quite a bit. I think that she would be a very different person if it wasn't for her upbringing, she would be more caring and loving, as would Tom. I think she is caring and loving but she hides it inside with all her emotions. I'm interested to see what will happen to her, I would like to see her get married to someone nice and get away from her father but I think she will marry Mr Bounderby and end up being very depressed. But I hope she doesn't because Louisa is a very interesting and complex character who will develop well. ...read more.