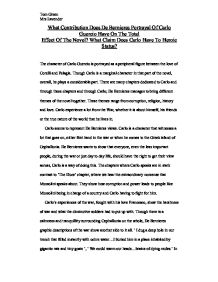 What Contribution Does De Bernieres Portrayal Of Carlo Guercio Have On The Total Effect Of The Novel? What Claim Does Carlo Have To Heroic Status?

What Contribution Does De Bernieres Portrayal Of Carlo Guercio Have On The Total Effect Of The Novel? What Claim Does Carlo Have To Heroic Status? The character of Carlo Guercio is portrayed as a peripheral figure between the love of Corelli and Pelagia. Though Carlo is a marginal character in that part of the novel, overall, he plays a considerable part. There are many chapters dedicated to Carlo and through these chapters and through Carlo; De Bernieres manages to bring different themes of the novel together. These themes range from corruption, religion, history and love. Carlo experience a lot from the War, whether it is about himself, his friends or the true nature of the world that he lives in. Carlo seems to represent De Bernieres views. Carlo is a character that witnesses a lot that goes on, either first hand in the war or when he comes to the Greek island of Cephallonia. De Bernieres wants to show that everyone, even the less important people, during the war or just day to day life, should have the right to get their view across, Carlo is a way of doing this. The chapters where Carlo speaks are in stark contrast to 'The Duce' chapter, where we hear the extraordinary nonsense that Mussolini speaks about. They show how corruption and power leads to people like Mussolini being in charge of a country and Carlo having to fight for him. ...read more.

He knows that his own people will not except him and decides that Greece is the answer, ' And do you know where I found myself? Do you know where I found out that I was, in another vanished world, beautiful and true? It was in the writings of a Greek.' Ancient Greek writings are well known to address the issues of homosexuality and the more relaxed perspective towards it. Much of the inner torment that Carlo seems to suffer leads him to great things, in particular, joining the army. He feels that it is a good way of forgetting the pressure to marry and have children. He doesn't have to pretend about what he is not, ' I had to flirt with girls in the playground of the school...I had to learn to relate fabulous histories of what I had done with girls.' Carlo proves that love can make you do great things later in the novel, when he sacrifices his own life for love, but he insists that he would do this when he joins the war. ' I would not desert him in battle, he would make me an inspired hero...I would dare to die for him.' We are shown that Carlo is true to his word when he sacrifices himself in the firing squad, trying to save Corelli. Carlo Guercio illustrates the corruption and the disorganisation of the Italian army and how it affected his life and therefore affected other people who Carlo came into contact with. ...read more.

Carlo only seems to aim for the admiration of two people, and they are Francesco and Captain Corelli. He is willing to sacrifice himself for the other and he proves this in two instances, ' I stood up and faced the Greeks. I was offering myself to their guns', and ' at the order to fire Carlo had stepped smartly sideways like a soldier forming ranks. Antonio Corelli, in a haze of nostalgia and forgetfulness, had found in front of him the titanic bulk of Carlo Guercio.' Stepping in front of Corelli during the firing squad was Carlo's most honourable act and it stands out above all the others as an act of heroism. Homer describes this act of love very well, ' Love of his own nature infuses into the lover. Love will make men dare to die for their beloved - love alone.' It is hard to decide whether Carlo is a very influential character and a hero to the novel. Is he acting as a mouthpiece to De Bernieres scrutiny and views or he could just be l'omosessuale, a missing part to a story. To make him homosexual increases the way in which people can react to him. Carlo is different, which makes him interesting but this view decreases the value that Carlo defiantly contributes to the novel. The fact that Carlo does act heroically and gives us descriptions of many different ongoing themes that surround every character in the book shows he probably isn't the 'token homosexual', but a significant and necessary inclusion. ...read more.