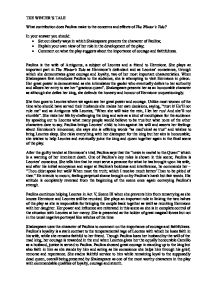 What contribution does Paulina make to the concerns and effects of The Winter's Tale?

THE WINTER'S TALE What contribution does Paulina make to the concerns and effects of The Winter's Tale? In your answer you should: * Set out clearly ways in which Shakespeare presents the character of Paulina; * Explain your own view of her role in the development of the play; * Comment on what the play suggests about the importance of courage and faithfulness. Paulina is the wife of Antigonus, a subject of Leontes and a friend to Hermione. She plays an important part in The Winter's Tale as Hermione's defendant and as Leontes' conscience, through which she demonstrates great courage and loyalty, two of her most important characteristics. When Shakespeare first introduces Paulina to the audience, she is attempting to visit Hermione in prison. ...read more.

Paulina brings Leontes' child to him against his will and asserts her feelings about Hermione's innocence; she says she is offering words "as med'cinal as true" and wishes to bring Leontes sleep. She risks everything with her disrespect for the king but her aim is honourable; she wishes to help Leontes and eventually joins the king and queen together again in the final scene of the play. After the guilty verdict at Hermione's trial, Paulina says that the "news is mortal to the Queen" which is a warning of her imminent death. One of Paulina's key roles is shown in this scene; Paulina is Leontes' conscious. She tells him that he must serve a penance for what he has brought upon his wife, and after his initial annoyance and anger at Paulina's boldness and interference, he commends her - "Thou didst speak but well/ When most the truth; which I receive much better/ Than to be pitied of thee." ...read more.

Paulina's loyality is a stark contrast to the temperamental rage of Leontes with which he loses faith in his wife, while she remains faithful to her friend. Though Paulina loses her husband by the will of the mad king, her courage is rewarded in the end when Leontes gives her the equally honourable Camillo as a husband, justice is served to Paulina. Paulina showed great courage in standing up to the king but also faith in him as she stands by him and acting as his conscience she helps him through his grief, remorse and repentance. She stadns faithful service to him while remaining loyal to the supposedly dead queen, overall being presented by Shakespeare as one of the most worthy characters in the play with commendable qualities of loyalty, courage and strenth. = ...read more.