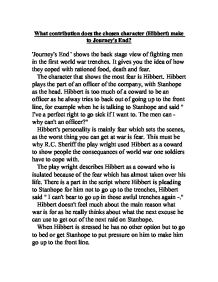 What contribution does the chosen character (Hibbert) make to Journey's End?

What contribution does the chosen character (Hibbert) make to Journey's End? 'Journey's End ' shows the back stage view of fighting men in the first world war trenches. It gives you the idea of how they coped with rationed food, death and fear. The character that shows the most fear is Hibbert. Hibbert plays the part of an officer of the company, with Stanhope as the head. Hibbert is too much of a coward to be an officer as he alway tries to back out of going up to the front line, for example when he is talking to Stanhope and said " I've a perfect right to go sick if I want to. The men can - why can't an officer?" ...read more.

When Hibbert is stressed he has no other option but to go to bed or get Stanhope to put pressure on him to make him go up to the front line. The two scenes which portray Hibberts role in the play are associated with fear and what Hibbert can be like when he is enjoying himself. Firstly there is a scene where Stanhope is having arguements with Hibbert about not going on a raid as he is complaining that he has got neuralgia in his eye, and is trying to persuade Stanhope to let him go to the doctor and go home. They start to disagree with everything when Stanhope cant take anymore and takes hold of his revolver. This scene supports how Hibbert is portrayed because it shows that he can make up different excuses about why he does not want to go out on the front line. ...read more.

This scene shows that Hibbert does have the courage to argue back at other people which is very unusal as he does not normally do this. This means that Hibbert does have a stronger character than I first thought. It shows that whatever the situation he is not scared to answer back, as he does when he is told to go and fight on the front line. Overall I conclude that Hibbert makes a strong contribution to 'Journeys End.' Without Hibberts character people would just be made to fight in something they maybe did not want to do. His character makes the story line more interesting because he argues back at suggestions that are made. If Hibbert was not a character in 'Journeys End' all of the soldiers would have had to have gone to fight on the front line. Also we would not have seen the affects of war on an individual without Hibbert being portrayed as he was. ...read more.

This response is a little superficial for a GCSE piece and the concepts explored need to be looked at in more detail. The question needs to be remembered at all times so that the essay shows more direction and the specific role and purpose of the character is considered in more detail.