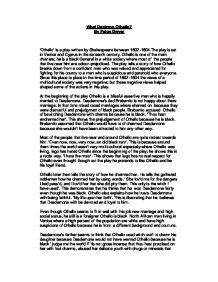 What Destroys Othello? By Paige Dwyer 'Othello' is a play written by Shakespeare between 1602-1604.The play is set in Venice and Cyprus in the sixteenth century. Othello is one of the main charters; he is a black General in a white society where most of the people that live near him are colour-prejudiced. The play tells a story of how Othello breaks down from a confident man who was valued and appreciated for fighting for his county to a man who is suspicious and paranoid who everyone. Since this place is place in the time period of 1602-1604 the views of a multicultural society was very negative; but these negative views helped shaped some of the actions in this play. At the beginning of the play Othello is a blissful assertive man who is happily married to Desdemona. Desdemona's dad Brabantio is not happy about there marriage. In that time mixed raced marriages where shamed on because they were distrustful and prejudgment of black people. Brabantio accused Othello of bewitching Desdemona with charms because he is black. 'Thou hast enchanted her'. This shows the prejudgement of Othello because he is black. Brabantio assumed that Othello would have to of charmed Desdemona because she wouldn't have been attracted to him any other way. Most of the people that live near and around Othello are quite raciest towards him. ...read more.

I know our county disposition well; in Venice they do let heaven see the pranks they dare not share show there husbands; their best conscience is not to leave't undone, but keep't unknown. This illustrates that Iago is informing Othello that all women in Venice cheat on their husbands. Othello believes Iago because he is not from around there and Iago plays on that. Also, Iago twists the story about there marriage.' She did deceive her farther, marrying you' this is slight proof that Desdemona could be cheating Othello because she lied to her father about getting married to Othello and she could be carrying out the same on Othello. Othello then starts to have his doubts. 'She's gone. I am abused'. Othello starts to believe that Desdemona is cheating on him because of the marriage and he starts to blame himself. Iago then warns Othello about jealously. 'O beware, my load, of jealousy it is the green-eyed monster which doth mock the meat it feds on'. Iago is telling Othello that he should be cautious of jealousy because it feds on you until you are at your lowest. Desdemona has a handkerchief that Othello gave her as his first gift to her, its Othello's first sign of love towards Desdemona. After Iago planting thoughts in to Othello's head, when Othello sees Desdemona there is tension between them.' ...read more.

After Othello Explains to Emilia why he killed her and how he saw Cassio with the handkerchief. Emilia then realized how Iago asked her to give him the handkerchief. With this Iago walks in and Emilia confronts Iago , of how he told Othello that Desdemona. 'He says thou told'st him that is wife was false'. Iago then explains how he was just simply telling Othello what he thought. Emilia then is shouting at Iago because she knows that he has done this on purpose. Iago then threatens to kill Emilia because she is not obeying so Iago Then Kills Her. Othello has a final speech where he speaks about how he feels guilty.' One not jealous but, being wrought'. This is showing how he as realised that killing Desdemona was wrong because she was innocent and he is feeling guilty. Othello then kills him self, this is how he see himself as 'redeeming him self' because he as taken Desdemona life so he will take his own. Othello is Destroyed mentally and physically by many different reasons. One of the main reason is the way Iago twists and turns the truth in to may different ways also how everyone trusts him helped him to. But also Othello is an outsider so it was easy for him to get caught up in the truth because he didn't know any better. ...read more.