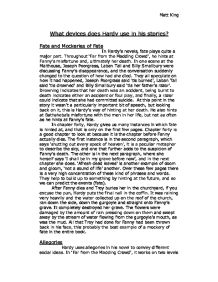 What devices does Hardy use in his stories? Fate and Mockeries of Fate

What devices does Hardy use in his stories? Fate and Mockeries of Fate In Hardy's novels, fate plays quite a major part. Throughout 'Far from the Madding Crowd', he hints at Fanny's misfortune and, ultimately her death. In one scene at the Malthouse, Joseph Poorgrass, Laban Tall and Billy Smallbury were discussing Fanny's disappearance, and the conversation suddenly changed to the question of how had she died. They all speculate on how it had happened, Joseph Poorgrass said 'tis burned', Laban Tall said 'tis drowned' and Billy Smallbury said 'tis her father's razor'. Drowning indicates that her death was an accident, being burnt to death indicates either an accident or foul play, and finally, a razor could indicate that she had committed suicide. At this point in the story it wasn't a particularly important bit of speech, but looking back on it, this is Hardy's way of hinting at her death. He also hints at Bathsheba's misfortune with the men in her life, but not as often as he hints at Fanny's fate. In chapter forty, Hardy gives us many instances in which fate is hinted at, and that is only on the first few pages. ...read more.

Namely that chapter forty was an allegory for Fanny dying. The way she is getting further and further to Casterbridge, where she is safe and 'there is light' is reminiscent of heaven. Her dog is like an angel, her guide on the way there, but in the end of the chapter it was stoned away. I am not sure as to whether it was an allegory or not, it would make for an interesting debate. Pathetic Fallacies A pathetic fallacy is when nature or inanimate objects are credited with human emotions, which basically amplifies the mood of the scene. In chapter forty-two, when Joseph Poorgrass is escorting Fanny's coffin to Weatherbury, there are many examples of this. Such phrases portraying nature's hostility to him and the coffin are 'a startling quiet', 'unfathomable gloom' and 'dead silence'. This indicates the fact that even nature is against her. The wagon wheels signify Joseph's nervousness. It is quite eerie, the adjectives he used indicate a kind of ghost-like presence, he does this by using words and phrases like: 'no perceptible motion', 'loomed', 'unfathomable gloom', etc. This creates a very gloomy and tense atmosphere, not dissimilar to that of the atmosphere in chapter forty when Fanny is on Casterbridge highway, one of impending doom and isolation. ...read more.

She is promised marriage, and she messes that up by going to the wrong church and on arriving at the right church, Troy decides he has had enough and leaves. She is pregnant without a husband, which was seen as a terrible thing at the time, and, after losing Troy, she gets him back only to die, child and all. A truly sad and pitiful story, her youth and innocence were the death of her. The saddest thing of all was the fact that nobody paid for her to have a bell toll or even for a grave for her. This is very sad, even in death she is truly alone, and if you notice, in chapter forty-five, even Fanny's grave was on its own (a pathetic fallacy), and to a certain extent, hidden from the view of the public, just like her pregnancy. Fanny's life, from the small part of it we saw, was riddled with sadness, deception and broken promises. She didn't even find happiness in her grave for more than a day before nature wreaked havoc upon it. I couldn't work out whether Hardy wanted the reader to pity Fanny or just look on her as a young woman who was led astray. He gives statements that support both sides of the argument. Matt King ...read more.