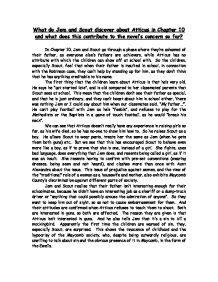 What do Jem and Scout discover about Atticus in Chapter 10 and what does this contribute to the novel's concern so far?

What do Jem and Scout discover about Atticus in Chapter 10 and what does this contribute to the novel's concern so far? In Chapter 10, Jem and Scout go through a phase where they're ashamed of their father, as everyone else's fathers are achievers, while Atticus has no attribute with which the children can show off at school with. So the children, especially Scout, feel that when their father is insulted in school, in connection with the Robinson case, they can't help by standing up for him, as they don't think that he has anything creditable to his name. The first thing that the children learn about Atticus is that he's very old. He says he "got started late", and is old compared to her classmates' parents that Scout sees at school. This mean that the children don't see their father as special, and that he is just ordinary, and they can't boast about him in school either, 'there was nothing Jem or I could say about him when our classmates said, "My father..."'. ...read more.

This issue of prejudice against women, and the view of the "traditional" role of a woman as a housewife and mother, also exhibits Maycomb County's discrimination against different parts of society. Jem and Scout realise that their father isn't interesting enough for their schoolmates, because he didn't have an interesting job as a sheriff or a dump-truck driver or "anything that could possibly arouse the admiration of anyone". So they want to keep him out of sight, so as not to cause embarrassment for them. And their attitudes are confirmed when Atticus refuses to teach them to shoot. Both are interested in guns, so both are affected. The reason they are given is that Atticus isn't interested in guns. And he also tells Jem that it's a sin to kill a mockingbird. Apparently the first time the children are warned of sin, they, especially Scout, are surprised. ...read more.

So when he's called up to shoot a rabid dog that's coming down the street, the children both have doubts, but the other adults have complete confidence in him. Atticus manages to shoot the dog between the eyes from a long distance away, after raising his glasses so as to lean closer to the gun's sights. We find that Atticus is the best shot in town, and called 'One-Shot' Finch by the town's populace. But in addition to this, we find that Atticus is extremely modest, and doesn't want the children to boast about him in school, even though Scout says, "Ain't everybody's daddy the deadest shot in Maycomb County". Jem explains that he isn't proud of having a gift or talent, so doesn't tell his own children. Chapter 10 is full of revelations for the children, especially Scout, who, being young, has seen less of Atticus than Jem, and is naturally more innocent. We can see that Atticus is modest, not even telling his children his own accomplishments. As Jem says, "Atticus is a gentleman, just like me!" ...read more.