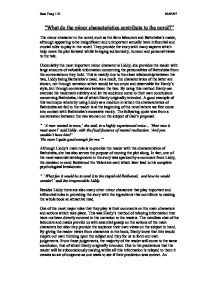 &quot;What do the minor characteristics contribute to the novel?&quot;

"What do the minor characteristics contribute to the novel?" The minor character in the novel, such as the farm labourers and Bathsheba's maids, although appearing to be insignificant and unimportant actually have influential and crucial roles to play in the novel. They provide the story with many aspects which help move the plot forward whilst bringing authenticity, humour and personal views to the tale. Undeniably the most important minor character is Liddy, she provides the reader with large amounts of valuable information concerning the personalities of Bathsheba from the conversations they hold. This is mainly due to the close relationship between the two, Liddy being Bathsheba's maid. As a result, the characteristics of the latter are shown, not through narration which would be too crude and observable for Hardy's style, but through conversations between the two. By using this method Hardy can exercise his trademark subtlety and let the audience come to their own conclusions concerning Bathsheba, that of which Hardy originally intended. A good example of this technique where by using Liddy as a medium in which the characteristics of Bathsheba are fed to the reader is at the beginning of the novel where we first come into contact with Bathsheba's excessive vanity. The following quote was from a conversation between the two women on the subject of Oak's proposal: "HHHHHHHHHHHHsad 'A man wanted to once,' she said, in a highly experienced voice... ...read more.

In addition, from this knowledge more accurate pre conceptions are made and leads back to the point I suggested previously on the topic of drawing interest. We learn that Boldwood has had madness in his family and therefore gain a more perceptive insight into Boldwood's passion and obsession: " 'Oh Coggan,' said Troy, as if inspired by a recollection, ' do you know if insanity has ever appeared in Mr. Boldwood's family?' Jan reflected for a moment. ' I once heard that an uncle of his was queer in his head, but I don't know the rights o't,' he said." Whilst the majority of the plot is moved along by the actions of the main characters, the comments that the minor characters add can sometimes lead to the development of a major event. This provides a more varied and realistic method of moving the plot forward. As Liddy is very close to Bathsheba, the main character, her comments often affect the outcome and hence the plot of the story. As mentioned previously, her remark suggesting the sending of a Valentine card to Boldwood seeded the obsession he had for Bathsheba. Further on into the story also provoked the event of Bathsheba seeing the tombstone which Troy erected for Fanny which lead to great despair and humiliation to Bathsheba: " 'I thought you might like to see where they have put Fanny, the trees hide the place from your window.' ...read more.

Aside from tale and characteristics, the plot that Hardy involves the rustics with also contain humour themselves, in actual fact most of the humour is centred around the labourers which results in the rustics actually having an air of amusement surrounding them. A particularly good example of a rustic providing humour in his actions is when Cainy Ball tries to tell Oak and the other labourers of his sighting of Bathsheba and Troy in Bath. However, he chokes on food and everyone is in suspense over what he has to say: " ' I've seed the world at last-yes-and I've seed our mis'ess - ahok-ahok-ahok!'" During times of extreme tension and apprehension the humour relieves the pressure for a small while. As we can see from the studies of the minor characters, although they seem negligible and insignificant, they actually play a very important and vital role in the structure and arrangement of the plot. At times the significance of their actions and comments provide the most important and major developments in the story. Therefore, their presence has been especially considered by Hardy and many of his subtle idea are conveyed through them. And so the function of the minor characters must not be dismissed. If they are not taken into serious attention one can easily fail to read the book at the depth at which Hardy intended and not fully appreciate his success which would be a great shame. Sean Fang 11R 02/05/07 ...read more.