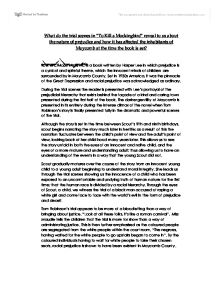 What do the trial scenes in To Kill a Mockingbird reveal to us about the nature of prejudice and how it has affected the inhabitants of Maycomb at the time the book is set?

What do the trial scenes in "To Kill a Mockingbird" reveal to us about the nature of prejudice and how it has affected the inhabitants of Maycomb at the time the book is set? To Kill a Mockingbird is a book written by Harper Lee in which prejudice is a cynical and spiteful theme, which the innocent minds of children are surrounded by in Maycomb County. Set in 1930s America, it was the pinnacle of the Great Depression and racial prejudice was acknowledged as ordinary. During the trial scenes the reader is presented with Lee's portrayal of the prejudicial hierarchy that exists behind the fa�ade of a kind and caring town presented during the first half of the book. The darker gentility of Maycomb is presented in its entirety during the intense climax of the novel when Tom Robinson's story is finally presented fully in the dramatic and powerful scenes of the trial. Although the story is set in the time between Scout's fifth and ninth birthdays, scout begins narrating the story much later in her life; as a result of this the narration fluctuates between the child's point of view and the adult's point of view, looking back at her child hood many years later. ...read more.

The town would not believe that a black man should feel sorry for a white girl and help her for no reward. "You felt sorry for her, you felt sorry for her?" In their opinion Tom is thinking too highly of himself if he has the audacity to feel sorry for a white person. He is also shown to be one of the "mockingbirds", a symbol of righteousness, whose decline is brought about by evil. "Remember it's a sin to kill a mockingbird" In saying this Atticus shows his devotion to instilling a moral conscience in his children, and tries to help them think independently of popular beliefs. "Now don't you be so confident, Mr. Jem, I aint never seen any jury decide in favour of a coloured man over a white man." This shows that prejudice against coloured people has brought great injustice to men like Tom Robinson who may have been innocent but are still convicted for something which strong evidence shows they have not done. "The way that man called him 'boy' all the time and sneered at him... it aint right". ...read more.

When Tom Robinson is testifying he says, "She says she never kissed a grown man before an' she might as well kiss a nigger. She says what her papa do to her don't count". This shows that her father is abusive and negligent towards his children and emphasises the lack of affection she had received. "I wondered if anybody had ever called her 'ma'am' or 'Miss Mayella' in her life". From Scouts thought, we can infer that Mayella had not received much respect or affection in the past. Symbolism in To Kill a Mockingbird is used extensively throughout the trail scenes. They reveal how the prejudice and narrow mindedness of Maycomb's citizens has affected certain inhabitants within Maycomb County. Harper Lee manages to show this by the use of symbols such as the Mockingbird. The Mockingbird represents the kind-heartedness and innocence that Lee tries to Instil throughout the novel. "Mockingbirds don't do one thing but make music for us to enjoy. They don't eat up people's gardens, don't nest in corncribs, they don't do one thing but sing their hearts out for us. That's why it's a sin to kill a mocking bird." To kill a Mockingbird is to kill goodness and decency, which is the greatest sin of all. ?? ?? ?? ?? ...read more.