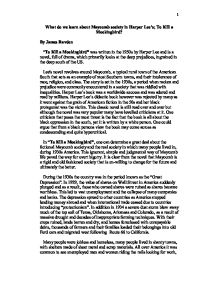 What do we learn about Maycomb society in Harper Lee's; To Kill a Mockingbird?

What do we learn about Maycomb society in Harper Lee's; To Kill a Mockingbird? By James Ravden "To Kill a Mockingbird" was written in the 1950s by Harper Lee and is a novel, full of drama, which primarily looks at the deep prejudices, ingrained in the deep south of the US. Lee's novel revolves around Maycomb, a typical rural town of the American South that acts as an example of most Southern towns, and their intolerance of race, religion, and class. The story is set in the 1930s, a period when racism and prejudice were commonly encountered in a society that was riddled with inequalities. Harper Lee's book was a worldwide success and was adored and read by millions. Harper Lee's didactic book however was rejected by many as it went against the grain of American fiction in the 50s and her black protagonist was the victim. This classic novel is still read over and over but although the novel was very popular many have levelled criticisms at it. One criticism that poses the most threat is the fact that the book is all about the black oppression in the south, yet it is written by a white person. One could argue that from a black persons view the book may come across as condescending and quite hypercritical. In "To Kill a Mockingbird", one can determine a great deal about the fictional Maycomb society and the real society in which many people lived in, during 1930s America. This ignorant, simple and judgmental way of Maycomb life paved the way for overt bigotry. It is clear from the novel that Maycomb is a rigid and old fashioned society that is un-willing to change for the future and ultimately the better. During the 1930s the country was in the period known as the "Great Depression". In 1929, the value of shares on Wall Street in America suddenly plunged and as a result, those who owned shares were ruined as shares became worthless. ...read more.

Their honesty and their intense sense of community is shown also when money is collected for Tom Robinson's mother. The Reverend has an honesty about him: "Nobody leaves here till we have ten dollars27" which compares to when the White men and women meet. When they give money they do it to make themselves feel better and although they give more money than the blacks, the Whites can afford to give more without them sacrificing too much. However the Blacks do it for the benefit of others in the group and have to sacrifice a little more than they can afford, to help the needy. The racism and prejudice that fills Maycomb seems to be deeply ingrained in society, seeping through the education system and the law. Both school and the law are deeply racist against blacks and it shows how widespread the problem was; the hatred of blacks was not just a rural opinion but an opinion that was held among the highest in society, such as the courts. Racism is even in the rigid education system in Maycomb. The teachers are clearly racist however this is the norm in Maycomb County. In one instance one of Scouts' teachers criticizes Hitler's prejudice against the Jews while indulging in her own prejudice against blacks: "we are a democracy [America]...over here we don't believe in persecuting anybody28". This shows the hypocrisy of the education system and that racism is rife there also. The teacher insinuates that because the USA is a: "DEMOCRACY29", fairness is available for all. However the blacks are suffering from the same kinds of discrimination and segregation that Jews experienced in Hitler's dictatorial regime. Ironically though the "DEMOCRACY" that the teacher speaks of is not an all-inclusive one that offers the same rights to all. The fact that racism towards Blacks is being portrayed as normal in the classroom must contribute to racism persisting in the South and shows that intolerance and discrimination does leave a great impression on the youth and their attitude in the future. ...read more.

Every one in Maycomb does the same thing and thinks the same things and because the Radleys' shut their doors, they are, especially Boo, considered social outcasts. Most of the town are prejudiced against Boo and local gossip seems to portray him as a "malevolent phantom39". Even the children run past the Radley house out of fear and won't eat anything that came from Radley trees, believing them poisoned. Maycomb's society is so suspicious: "a baseball hit into the Radley yard was a lost ball and no questions asked.40" Yet a few people accept him for what he is. Miss Maudie remembers him when he was a boy who always spoke nicely; and Atticus tries to make the children understand him and not torment him. As well as the prejudice against people in Maycomb, in the 1930s there was friction between the North and South of the USA. This was probably due to the difference in beliefs, where the North had more modern beliefs the South were far behind with ancient thinking. The Northern states were willing to look into the future, modernise, and develop, but the South were mostly stubborn people who did not want to develop or adapt and as a result, were full of intolerance. This friction can still be seen today but it is not as evident. However the two areas are totally different in social structure and life. This dissonance is shown in "Mississippi Burning", where Clayton Townley says: "in the courts of Mississippi, they have been reminded, that they cannot, by force, turn our communities into replicas of their communities...communities in which negroes run riot, unrestrained and unpunished, as they do this summer in the streets of Harlem, or they do in the streets of Oakland, or they do in the STREETS OF CHICAGO41". They call it the UNITED STATES OF AMERICA, yet in the 1930s they weren't so united but split as if dividing the North and South. Furthermore there was prejudice in Maycomb and in the Deep South in the 1930s against different religions. ...read more.