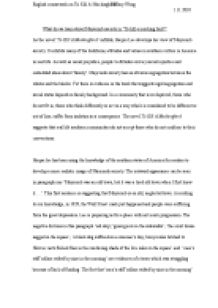 What do we learn about Maycomb society in To kill a mocking bird?

﻿English coursework on To Kill A Mockingbird. Tiffany Wong 1.11.2010 What do we learn about Maycomb society in ?To kill a mocking bird?? As the novel ?To Kill A Mockingbird? unfolds, Harper Lee develops her view of Maycomb society. It exhibits many of the traditions, attitudes and values in southern culture in America in real life. As well as racial prejudice, people?s attitudes convey social injustice and embedded ideas about ?family?. Maycomb society has an obvious segregation between the whites and the blacks. Yet there is evidence in the book that suggests rigid segregation and social status depend on family background. In a community that is so deprived, those who do not fit in, those who think differently or act in a way which is considered to be different or out of line, suffer from isolation as a consequence. The novel To Kill A Mockingbird suggests that real life southern communities do not accept those who do not conform to their conventions. Harper lee has been using the knowledge of the southern states of America for readers to develop a more realistic image of Maycomb society. The outward appearance can be seen in paragraph one ?Maycomb was an old town, but it was a tired old town when I first knew it?.?. This first sentence is suggesting that Maycomb is an old, neglected town. ...read more.

?To Maycomb, Tom?s death was typical of a nigger. Typical of a nigger to cut and run. Typical of a nigger?s mentality to have no plan, no thought for the future, just run at the first chance he got.? This suggests not only the brutal way the blacks are treated but also their loss of individuality and how invisible they are as people. Education in Maycomb society is also shown in the novel. The school system and lessons the children receive are gently mocked: ?People didn?t seem to go to school to achieve highly, they went to school because it was a school.? This suggests that schooling are not seen as important as it is nowadays. Flexibility for independent views and thoughts are limited as Scout says: ?but the prospect of spending nine months refraining from reading and writing made me want to run away?. Miss Caroline stopped Scout in developing her own sense of intelligence and independence, and does her best to prevent her progress: ?Now tell your father not to teach you any more?. The attitudes displayed by Miss Caroline are opposed to the ideas of the book. Harper Lee is suggesting that schools and teachers in Maycomb society gives children a fixed road to take for the early years of their life and when Scout turns off the road she is told off : ?I mumbled that I was sorry and retired meditating on my crime.? ...read more.

However later on in the novel we find Scout is educated out of this point of view and is deeply upset when Aunt Alexandra refers to Walter as ?trash?. This suggests hope for the future of Maycomb as the younger generations will develop independent views on equality. While the novel realizes all traditional tragic elements of Southern fiction, it also moves forward into a future that sees the South relinquishing these slowly, without losing its sense of community and identity. Maycomb?s society is controlled by segregation, hierarchy, prejudice, family, loneliness and isolation. These themes unify into the moral landscape of a small town. Within the novel we live for a while in Maycomb and get to know its inhabitants. We begin to understand the moral tone of the town with its hypocrisies, its self-interest and its fear of change. We see young Scout develop moral courage that helps the reader see hope for the people of Maycomb finding life beyond discrimination, segregation and racial prejudice and a way into justice and equality. In a world in which innocence is threatened by injustice, cruelty, prejudice, and hatred, goodness can prevail in the form of sympathy, understanding, and common sense, as evidenced by how the townspeople?s affectionate willingness to help one another enables them to overcome the intrusion of these Gothic elements into their simple small-town lives. ...read more.