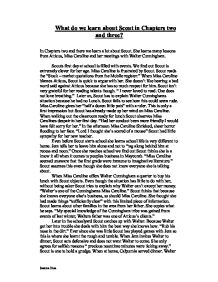 What do we learn about Scout in Chapters two and three?

What do we learn about Scout in Chapters two and three? In Chapters two and there we learn a lot about Scout. She learns many lessons from Atticus, Miss Caroline and her meetings with Walter Cunningham. Scouts first day at school is filled with events. We find out Scout is extremely clever for her age. Miss Caroline is frustrated by Scout. Scout reads the "Stock - market quotations from the Mobile register." When Miss Caroline blames Atticus, Scout is quick to argue with her. She doesn't like hearing a bad word said against Atticus because she has so much respect for him. Scout isn't very grateful for her reading talents though. " I never loved to read. One does not love breathing." Later on, Scout has to explain Walter Cunninghams situation because he had no Lunch. Scout fails to see how this could seem rude. Miss Caroline gives her "half a dozen little pats" with a ruler. ...read more.

Even though the situation has little to do with her, without being asker Scout tries to explain why Walter can't except her money. "Walter's one of the Cunninghams Miss Caroline." Scout thinks that because she knows everyone else's business, so should Miss Caroline. She thought she had made things "sufficiently clear" with this limited piece of information. Scout learns about other families in the area from her father. She copies what he says. "My special knowledge of the Cunningham tribe was gained from events of last winter, Walters father was one of Atticus's clients." Later in the schoolyard Scout catches up with Walter. Because Walter got her into trouble she deals with him the best way she knows how. "Rub his nose in the dirt." Ever since she was little Scout has played games with Jem so this is where she learnt the rough and tumble. When Jem invites Walter to dinner, Scout acts defensive and does not want Walter to come. ...read more.

When Scout returns home she has a conversation with Atticus. Scout tells Atticus of the events of the day and complained that she didn't want to go back to school. Scout respects Atticus so listened to what he had to say. "You never really understood a person until you consider things from his point of view." He teaches Scout valuable lessons about judging people. Scout goes on to complain about how Miss Caroline wouldn't let her read or write. She says that the Ewells don't have to go to school. Scout listens to her father without interrupting him and takes on board what he has to say. Atticus then compromises saying if Scout continues at school, she can continue to read with him. Scout hastily agrees. Scout is a spontaneous person. She says what she thinks without considering how it could affect people. She judges people on first impressions and is quite quick tempered. However she has a great deal of respect for Atticus and her heart is in the right place. Scout knows the difference between right and wrong. Joanna Dias ...read more.