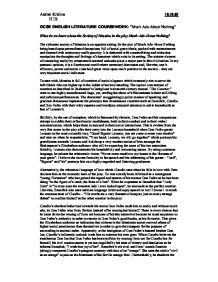 What do we learn about the Society of Messina in the play Much Ado About Nothing?

GCSE ENGLISH LITERATURE COURSEWORK: "Much Ado About Nothing" What do we learn about the Society of Messina in the play Much Ado About Nothing? The elaborate society of Messina is an apposite setting for the plot of Much Ado About Nothing being based upon premeditated deceptions, full of social grace ideals, packed with entertainment and churned with aristocracy and hypocrisy. It is darkened with counterfeiting and tricks that manipulate the thoughts and feelings of characters which exist in its setting. The sinister element of concealing reality by ornamented outward outlooks plays a major part in this civilization. In my personal opinion, it is a flamboyant world where ceremony dominates and, likewise, one's affluence, power and social class hold great value upon one's position in the society - they are very important social indicators. To start with, Messina is full of courtiers of social elegance which constantly aim to serve the individuals who are higher up in the ladder of societal standing. The typical conventions of courtiers as described in Baldassare's Casitglione's sixteenth century manual "The Courtier" were to use highly manufactured lingo, yet, crafting the show of effortlessness in their self-lifting and judicious performances. The characters' exaggeratingly polite manner of speaking and gracious demeanour represents the principle that Renaissance courtiers such as Benedick, Claudio and Don Pedro with their witty repartee and wordplay attracted attention in noble households as that of Leonato's. Skilfully, by the use of metaphor, which is festooned by rhetoric, Don Pedro and his companions attempt to exhibit their refined social modishness, both in their conduct and in their verbal communication, which helps them to succeed in their social interactions. This is evident from the very first scene in the play after their entry into the Leonato household when Don Pedro greets Leonato in the most colourful way, "Good Signior Leonato, you are come to meet your trouble" and later on when he requests him, "Your hand, Leonato, we will go together" which portrays his gratefulness towards Leonato and builds ...read more.

Noticeably, Beatrice's dominance in this scene would shock the audience who would have previously thought that the women were helpless and always controlled by the men in the society. From a personal viewpoint, it suggests me that although the women were supposed to be serene in their stance being dependant on the men, they could also command men to do what they wanted them to do, in Beatrice's case being the re-establishment of a fellow woman's honour by means of aggressive emotional blackmail as Beatrice did by proclaiming, "You would kill me to deny it". Shakespeare displays varying perceptions on the charisma and benefits of marriage from the varying viewpoints of the characters in the Messinian society. Claudio and Hero being the standard romantic lovers eventually have a straightforward and desirable marriage. In contrast, Beatrice and Benedick take pride in their similar unorthodox, stubbornly negative stance to romantic love and marriage. This is evident from the very first scene of the play when Beatrice stresses, "I had rather hear a dog bark at a crow than a man swears he loves me" and Benedick challenges his companions, Claudio and Don Pedro, that if he goes against his word of "dying a bachelor", Don Pedro should, "hang me (him) in a bottle like a cat and shoot at me (him). Nevertheless, because the play is a romantic comedy whose conventions demand a successful pairings of similar characters such as themselves as the conclusion of the play, the two wit rivals are made give in to their pride - melt away their fixed views of leading an unmarried life, fall in love and accept marriage, courtesy of their companions. From a different perspective, one can assume that despite their "merry wars", Benedick and Beatrice were paired off from the beginning of the play and were, inevitably, bound to fall in love by their contradictory traits and independent characteristics. ...read more.

Looking at Dogberry's significance in the play from a different point of view than that of being the jester, he can also be classed as the play' real hero. Although, unable to communicate himself in a comprehendible manner and being a disgrace on the authority, he and Verges remain the only characters who were successful in uncovering Don Jon's and Borachio's treacherous plot so that Hero's dignity could be restored again. This suggests the Elizabethan audience that people should listen more to the lower classes because even their plain ignorance can sometimes grasp very vital information as the culprit Borachio, himself, admits to Don Pedro in Act 5 Scene 1, lines 219-220, "What your wisdoms could not discover, these shallow fools have brought to light". Finally, this would lead the Elizabethan audience to the derivation that, unlike in their society, the less educated you are in the Messinian society the more likely you are to remove deception and corruption as it is the lower-class character of Dogberry who finds the resolution of the play. In conclusion, I believe we learn that the society of Messina is male -dominated and hence the theme of female tameness is quite prominent as they are the typical characters in the play who are constantly controlled by others especially the heroine of the play mostly shown as helpless. However, both sexes use deception to thrive in their particular objectives although it is the men who use the wicked form of treachery as a means to succeed in a social context even if this means at the cost of maltreatment of women whereas women use the more light hearted form of it for purposes of unity and reconciliation. Despite this, the Messinians were frequently involved in amusements from which they entertained themselves, the merriment being in the form of music, dance and practical jokes or from hypocritical pursuits such as masquerades. Akshat Krishna 10.10.03 11TS ...read more.