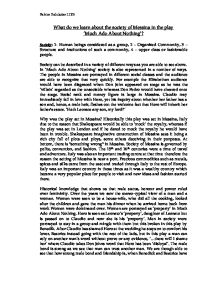 What do we learn about the society of Messina in the play 'Much AdoAbout Nothing'?

What do we learn about the society of Messina in the play 'Much Ado About Nothing'? Society: 1- Human beings considered as a group, 2 - Organized Community, 3 - Structure and institutions of such a community, 4 - upper class or fashionable people. Society can be described in a variety of different ways as you are able to see above. In 'Much Ado About Nothing' society is also represented in a number of ways. The people in Messina are portrayed in different social classes and the audience are able to recognize that very quickly. For example the Elizabethan audience would have been disgraced when Don John appeared on stage as he was the 'villain' regarded as the unsociable whereas Don Pedro would have cheered onto the stage. Social rank and money figure is large in Messina. Claudio may immediately fall in love with Hero, yet his inquiry about whether her father has a son and, hence, a male heir, fleshes out the welcome fact that Hero will inherit her father's estate. 'Hath Leonato any son, my lord?' Why was the play set in Messina? Historically this play was set in Messina, Italy due to the reason that Shakespeare would be able to 'mock' the royalty, whereas if the play was set in London and if he dared to mock the royalty he would have been in trouble. Shakespeare imaginative construction of Messina sees it being a rich city full of plots and ploys, some others deceiving in their purposes. At bottom, there is "something wrong" in Messina. Society of Messina is governed by polite, convention, and fashion. The 15th and 16th centuries were a time of travel and adventure. Italy was also an important trading centre at that time therefore the reason the setting of Messina is near a port. Precious commodities such as metals, spices and silks came from the east and traded through Italy to the rest of Europe. ...read more.

If we do see misery for a father what does it feel like if you have been cheated on? Despair, disgust was how Claudio felt like when Hero is accused of being with other men. 'She's but the sign and semblance of honour' this is his rage against deception. The phrase 'rotten orange' that Claudio uses to describe Hero conveys that on the outside Hero is innocent but there is corruption on the inside. This is backed up by Don Pedro by taking Claudio's side against Hero. 'I stand dishonour'd that have gone about, To link my dear friend to a common stale'. Leonato's daughter has just been called a 'common stale' by a man whom Leonato has accepted as his own and Leonato has been humiliated by that same man. 'Death is the fairest cover for her shame'. This is part of the social norms, it is Leonato's way of avoiding humiliation. Leonato chooses Hero's death in order to protect his reputation and avoid embarrassment. From the start of Act 4 Scene 1 where he is humiliated dramatic irony is used, the audience knows more than Leonato does. Thus we are able to see his anxiety, when Friar Francis asks Claudio 'You come hither, my lord, to marry this Lady?' Claudio's response is a simple 'No'. Leonato becomes unsettled he says hastily 'To be married to her, friar: you come to marry her.' This is an example of Leonato's anxious behaviour. Leonato disowns her verbally by comments such as, 'Do not live, Hero, do not ope thine eyes ...', 'No part of it is mine; ...' He uses words such as 'smirched' and 'mired' to describe how Hero has become dirty. Furthermore, he speaks of her loss of honour as an impossible stain from which he cannot distance himself, no matter how hard he tries: 'O she is fallen / Into a pit of ink, that the wide sea / Hath drops too few to wash her clean again'. ...read more.

for Beatrice to only reply, 'Why no, no more than reason', leaving the pair of them in a sticky situation, but with a bit of persuading, they finally come clean with the admitting for their attraction to one another.' Peace I will stop your mouth'. We are able to see that society can be helpful in matching the pair together. The society of Messina has worked together to bring Beatrice and Benedik together. The masking of Hero and the other women reveals that the social institution of marriage has little to do with love, when Claudio has to pay the price of 'killing' Hero with his words. When Claudio asks, 'Which is the lady I must seize upon?' he is ready and willing to commit the rest of his life to one of a group of unknowns. His willingness comes not only from his guilt about bullying an innocent woman on her wedding day but also from the fact that he may care more about rising in Leonato's favour than in marrying for love. Therefore he is agreeing to meet Leonato's demand and has performed a social ritual to clear his name. Society in Messina can also be quite corrupt as we see the evil plot of Don John. 'Therefore know, I have earned of Don John a thousand ducats.' Society at its lowest as Don John corrupts the social system to get his own way. As in those days infidelity is a big crime and he has paid out to Borachio to cause havoc in Messina and prove to Claudio that Hero has been 'disloyal'. The audience are able to see how low society can get in disrupting the lives of others. The song that Balthasar sings also reflects this sentences in his song such as, 'Men were deceivers ever:', 'The fraud of men was ever so'. The song that Balthasar sings is a song about infidelity. However, the men listening all fail to note this song. Indeed, the song actually foreshadows what will be mis-noted in the near future when Hero is accused of infidelity. ...read more.