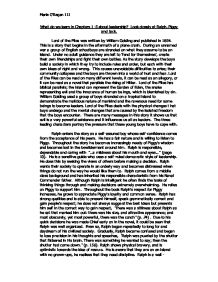 What do we learn in Chapters 1-5 about leadership? Look closely at Ralph, Piggy and Jack.

What do we learn in Chapters 1-5 about leadership? Look closely at Ralph, Piggy and Jack. Lord of the Flies was written by William Golding and published in 1854. This is a story that begins in the aftermath of a plane crash. During an unnamed war a group of English schoolboys are stranded on what they assume to be an island. Under no adult guidance they are left to 'fend for themselves', create their own friendships and fight their own battles. As the story develops the boys build a society in which they try to include rules and order, but each with their own ideas of right and wrong. This causes unavoidable difficulties to arise; their community collapses and the boys are thrown into a world of hurt and fear. Lord of the Flies can be read on many different levels, it can be read as an allegory, or it can be read as a novel that parallels the rising of Hitler. Lord of the Flies has biblical parallels; the island can represent the Garden of Eden, the snake representing evil and the innocence of human beings, which is blemished by sin. William Golding used a group of boys stranded on a tropical island to demonstrate the malicious nature of mankind and the ravenous need for some beings to become leaders. Lord of the Flies deals with the physical changes that boys undergo and the mental changes that are caused by the isolated freedom that the boys encounter. There are many messages in this story it shows us that evil is a very powerful existence and it influences us all as leaders. The three leading characters portray the pressure that these young boys have to cope with. ...read more.

From the start, Jack is an authoritarian. He shouts orders at them and he makes the decisions without anyone else's opinions. When Jack is introduced, his appearance matches his personality and ideas, the way in which the clothes he wears are describes, reflects the way he is. He wears a black "circling" cloak, his red hair mirrors his short fiery temper, he controls his choir and he has the ability to make them listen to him. Jack thoroughly rejects the idea of having a democratic leadership; he simply wants to enforce his decisions onto the boys himself. Jack likes to be called by his last name "Merridew". This gives him a sense of authority, which links to having power. His craving to be Chief is clearly apparent in his first appearance. When the idea of having a Chief was mentioned Jack spoke out instantly, "I ought to be chief" said with simple superiority, "because I'm chapter chorister and head boy". He does not consider that anybody else would be capable of being a good chief; he was just concerned about having power. Jack is very short tempered and shows his true side, and anger when he stabs the tree trunk. Jack is very violent, unreasonable and insensitive which is in complete contrast to Ralph. Roger suggests having a vote to make a chief and when electing a chief, it is ironic that Piggy possesses so many of the qualities needed for a leader, however, he is unsuitable for chief position because of his background and his physical appearance. It is Piggy who is the very first to suggest having a meeting, it is evident that he does not see the island as a playground and a great game and adventure. This is in complete contrast with both Jack and Ralph. ...read more.

Jack even tries to hide his identity behind a mask with the protection of a mask he is able to display the savage and brutal power which marks his leadership. Lord of the flies uses the changes experienced by the boys on an uninhabited island to show the evil nature of man as a leader. By using different characters the author is able to portray numerous types of character found in our society. Their true selves are revealed in the freedom from morals and punishment of a world with adults and higher authority. Under the authority of their former society, Jack's inner evil was concealed. However, as the rules no longer existed, he was free to do what he desired and act as the immoral autocratic born leader he is. Ralph had grown so used to the stability of a civilized world that the changes they experience were difficult for him to grasp. He became confused and less capable of thinking in clarity and independently. Even though he too had experienced the desire for aggression that had driven Jack and the hunters to momentary heights of madness, his more sensitive personality and his sense of responsibility saved him from total savagery. These two qualities also helped to keep Piggy from becoming primal in behaviour. He was made an outcast by his undesirable physique and his superior intellect. This isolation and wisdom helped Piggy to retain his civilized behaviour. He was made painfully more aware of the great amount of inequality in the world. From these three characters, it could be seen that under the same circumstances, different individuals can develop in different ways depending on the factors within themselves and how they cooperate with other people. Their traits and what they knew determined how they would understand and adapt to a new environment. Lord of the Flies truly depicts some peoples savaging need to be leaders. Marie O'Regan 11J ...read more.