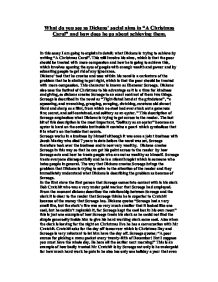 What do you see as Dickens' social aims in

What do you see as Dickens' social aims in "A Christmas Carol" and how does he go about achieving them. In this essay I am going to explain in detail; what Dickens is trying to achieve by writing "A Christmas Carol". This will involve his aims, which is that the poor should be treated with more compassion and how he is going to achieve this, which involves opening the eyes of people with enough wealth and power and by educating people to get rid of any ignorance. Dickens' tool that he creates and uses within his novel is a caricature of the problem that he is aiming to put right, which is that the poor should be treated with more compassion. This character is known as Ebenezer Scrooge. Dickens also uses the festival of Christmas to his advantage as it is a time for kindness and giving, so dickens creates Scrooge to an exact contrast of them two things. Scrooge is described in the novel as "Tight-fisted hand at the grindstone", "a squeezing, and wrenching, grasping, scraping, clutching, covetous old sinner! Hard and sharp as a flint, from which no steel had ever stuck out a generous fire; secret, and self-contained, and solitary as an oyster." This description of Scrooge emphasises what Dickens is trying to get across to the reader. The last bit of this description is the most important, "Solitary as an oyster" because an oyster is hard on the outside but inside it contains a pearl which symbolises that it is what's on the inside that counts. Scrooge works in a business by himself although it was once a joint business with Jacob Marley who died 7 years to date before the novel was set, Scrooge therefore took over the business and is now very wealthy. Dickens creates Scrooge in this way so that he can get his point across to the reader by how Scrooge acts and how he treats people who are not as wealthy as himself. ...read more.

Were there no poor homes to which its light would have conducted me!" This is a key quote because Marley is telling Scrooge that the reason he is in eternal punishment is because that he treated everyone who was poor or not as wealthy as himself badly. This is the exact problem that Dickens is trying to put write and in his novel he has created an eternal punishment in the after life for people that do this during their mortal life. Dickens is therefore not subtle at all about the problem he is trying to solve in fact he is extremely obvious about it. The reader then witnesses' a second change in Scrooge; "Thank'ee!" this is Scrooge showing that he is grateful for Marley giving him this information. This scene with Marley's ghost is very important as it sets the storyline and it highlights the problem that Dickens is trying to solve. Also the reader witnesses' the first two changes of Ebenezer Scrooge. The First of the three spirits is described by dickens as; "a strange figure like a child: yet not so like a child as like an old man, its hair was white with age; yet the face had not a wrinkle in it. It wore a tunic of the purest white, But the strangers thing about it was that from the crown of its head there sprung a bright clear jet of light, by which all this was visible" This description that Dickens creates is again working with symbolism as the first spirit has a jet of light coming out from its head therefore the first spirit is associated with light. Scrooge however is a dark person therefore when this jet of light was put before him; "he had a special desire to see the spirit in his cap; and begged him to be covered." This means that Scrooge disliked the light being shone on him. ...read more.

The spirits of all three shall strive within me. I will not shut out the lessons that they teach me." This is Scrooges guarantee to change and never to change back to the ignorant, selfish, dreadful person that he once was. Scrooge stuck to his word he had changed, he is a complete contrast of what he once was and from the start of the last stave this is lucid; "I am as light as a feather, I am as happy as an angel, I am as merry as a school-boy. I am as giddy as a drunken man." In each one of these similes there is a contrast of symbolism to what Scrooge was at the start of the novel. 'Feather' is soft. 'Angel' is light. 'Merry school boy' or 'Giddy drunken man' is warm. It is also clear that he is kind as he increases the wage of his maid and his clerk Mr. Bob Cratchit. A key incident within the novel illustrates what Dickens wants to alleviate this is the scene when the two children immerge from the second spirits cloak; "This boy is ignorance. This girl is want. Beware of them both, and all of their degree, but most of all beware of this boy, for on his brow I see written which is Doom, unless the writing be erased." This is saying that Dickens think that we need to educate the poor to stop their ignorance and that the poor can help themselves, but when the rich are wilfully ignorant we need to help them to stop so that they can help change things to create a better world for everyone. Dickens novel produced some immediate effects and the poor were treated better by those who read the novel. Due to Scrooge changing throughout the novel from one extreme (hard, cold and dark) to another (soft, warm and light) it persuaded people who could relate to Scrooge in some way that they could do the same. ...read more.