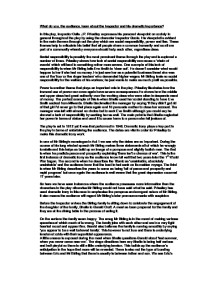 What do you, the audience, learn about the Inspector and his dramatic importance?

What do you, the audience, learn about the Inspector and his dramatic importance? In this play, Inspector Calls J.P. Priestley expresses his personal viewpoint on society in general throughout the play by using the character Inspector Goole. His viewpoint is evident in the main themes through out the play which are social responsibility, power and lies. These themes help to articulate his belief that all people share a common humanity and so all are part of a community whereby everyone should help each other, regardless class. Social responsibility is possibly the most prominent theme through the play and is explored a number of times. Priestley shows how lack of social responsibility can cause a 'chain of events' which will lead to something rather more severe. One example of this lack of responsibility is when Mr Birling tells Eva Smith to 'clear out'. He doesn't consider what would happen to her if she had no money. He just saw her as a potential business threat she was one of the 'four or five ringer leaders' who demanded higher wages. Mr Birling feels no social responsibility for the welfare of his workers; he just wants to make as much profit as possible. Power is another theme that plays an important role in the play. Priestley illustrates how the immoral use of power can once again have severe consequences. He shows how the middle and upper class had great authority over the working class who were often in desperate need of money. The perfect example of this is when Sheila used her social standing to have Eva Smith sacked from Milwards. Sheila blackmailed the manager by saying 'If they didn't get rid of that girl I'd never go to that place again and I'd persuade mother to close her account. The manager was left with almost no choice but to sack Eva Smith although you could say he showed a lack of responsibility by sacking her as well. ...read more.

Mr Birling says the inspector 'behaves in a very peculiar and suspicious manor'. This confirms that they don't totally believe he was a police Inspector and as they thing about it for longer they begin to think it was a hoax. Just as the tension and drama begins to lessen there is one final dramatic twist. Having confirmed with the police no girl has been reported dead the family receive a phone call. Mr Birling is told 'a girl has just died and is on her way to the infirmary'. Tension and drama are once again created and a whole new dimension is added to the play. The family as well as the audience, is left shocked and it once again raises the question what and who exactly was the inspector? It is the unresolved tension at the end of the play that is effective. One function of the Inspector is to teach the Birling family about social responsibility. He arrives just as Mr Birling has been doing a speech about 'every man for himself'. In a sense the Inspector has come to try and alter this viewpoint which Mr Birling is preaching to his family. Its appears he has come to teach he family a strong social message. The inspector encourages community spirit 'We are members of one body. We are responsible for each other'. He is saying here that the community must work together to help each other. Another function of the inspector is the story teller. As soon as he enters the house after a short greeting with the family he immediately begins to tell the story, 'two hours ago a young woman died in the infirmary...' He gets straight on with the story and helps us have an understanding of what actually happened. He also pieces together the bits of information to make the story fit. He uses a 'small postcard sized photo' of the girl to make sure each character knows the same woman and pieces the story together. ...read more.

And he shows that it is easy to make a change but they must work 'together' and not as 'one body'. He also wants to persuade the audience to that they should feel responsible for the people around them. The inspector plays the role traditional role of the policeman in the 'who dunnit story' by slowly uncovering the truth through his commanding manner, careful questioning and ability to put information together. Although it is similar to a 'who dunnit' the genre cannot be classified as this as there is no actual illegal crime committed in the play. The play is intended to teach us a message about society and this is entwined by a clever thriller type story line. The storey climaxes right at the very last moment of the play. Mr Birling receives a call saying that a girl has died and inspector has come round to visit the house. This brings back the characters emotion of feeling 'dumbfound and guilty' and the audience is left in a state of astonishment. The underlying tension that was left after the inspector's abrupt exit has erupted once more and the audience are left wondering what the family will do now. Will they have learnt from there mistakes or will they make up a story. The telephone call has the same dramatic effect as the doorbell which we see at the start of the play when the inspector entered, they are both sharp, sudden and unexpected. It also brings what exactly the inspector was back into the lime light. He almost predicted what would happen and we as an audience wonder how he could predicted the death of the girl. The play ends shrouded in mystery and once again the Inspector becomes of dramatic importance although he isn't actually present. The audience sense something rather strange. Throughout the play the Inspector has been of dramatic importance or had a dramatic effect. From his abrupt entrance where there is a 'sharp' ring of the doorbell to his dramatic speech and compelling disappearance he has imposed drama, tension and excitement adding to an enjoyable play. ...read more.