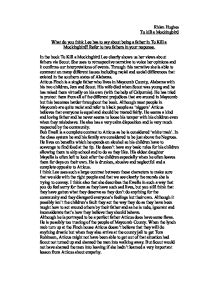 What do you think Lee has to say about being a father in To Kill a Mockingbird?

Rhian Hughes To kill a Mockingbird What do you think Lee has to say about being a father in To Kill a Mockingbird? Refer to two fathers in your response. In the book To Kill a Mockingbird Lee clearly shows us her views about fathers via Scout. She uses to retrospective narrative to voice her opinions and it confirms our interpretations of events. Through this narrative she is able to comment on many different issues including racial and social differences that existed in the southern states of Alabama. Atticus Finch is a single father who lives in Maycomb County, Alabama with his two children, Jem and Scout. His wife died when Scout was young and he has raised them virtually on his own (with the help of Calpurnia). ...read more.

He doesn't have any basic rules for his children allowing them to skip school and to do as they like. His eldest daughter Mayella is often left to look after the children especially when he often leaves them for days on their own. He is drunken, abusive and neglectful and a complete opposite to Atticus. I think Lee uses such a large contrast between these characters to make sure that we side with the right people and that we see clearly the morals she is trying to convey. I think also that she describes the Ewells in such a way that you do feel sorry for them as they have such sad lives, but you still think that they have gotten what they deserve as they don't do anything for the community and they disregard everyone's feelings but their own. ...read more.

But Scout would not have shamed the men into leaving if she hadn't learned a very important lesson from Atticus about empathy. 'You never really understand a person until you consider things from his point of view - until you climb into his skin and walk around in it.' You can really tell the two fathers apart by the way they talk. Atticus uses polite language and is eloquent where as Bob Ewell uses harsh words and foul language. 'Mayella was screamin' fit to beat Jesus-' You can tell that Atticus has had a better education than Ewell. Atticus has learnt that it isn't right to talk this way, in public or not, but Bob has never learnt that it is impolite to use foul language. He shows this in court when he is giving evidence. ...read more.