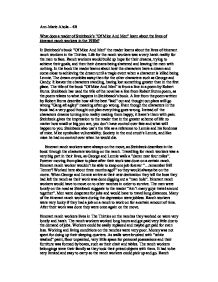 What does a reader of Steinbeck's &quot;Of Mice And Men&quot; learn about the lives of itinerant ranch workers in the 1930s?

Ann-Marie Ahola - 4B What does a reader of Steinbeck's "Of Mice And Men" learn about the lives of itinerant ranch workers in the 1930s? In Steinbeck's book "Of Mice And Men" the reader learns about the lives of itinerant ranch workers in the Thirties. Life for the ranch workers was a very harsh reality for the men to face. Ranch workers would build up hope for their dreams, trying to achieve their goals, and then their dreams being shattered and leaving the men with nothing. In the book the reader learns about how the characters have a dream and come close to achieving the dream until a tragic event when a character is killed being Lennie. The dream crumbles away then for the other characters such as George and Candy. It leaves the characters standing, having lost something greater than in the first place. The title of the book "Of Mice And Men" is from a line in a poem by Robert Burns. Steinbeck has used the title of the novel as a line from Robert Burns poem, as the poem relates to what happens in Steinbeack's book. A line from the poem written by Robert Burns describe how all the best "laid" out and thought out plans will go wrong "Gang aft agley" meaning often go wrong. Even though the characters in the book had a very good thought out plan everything goes wrong. Instead of the characters dreams turning into reality making them happy, it leave's them with pain. ...read more.

Steinbeck gives the reader the impression that many ranch men didn't have many friends. Ranch workers weren't able to have stable friends, as they couldn't keep in contact with each other due to being in different locations. Most of the men then didn't trust each other in the bunkhouse " Maybe ever'body in the whole damn world is scared of each other" due to competition for jobs. Ranch men were scared of "getting the sack" so they didn't seem to give a "damn about nobody". The lives of the older generation working on the ranches in the Thirties gives the reader the impression that it was a very lonely and miserable period of their lives. On the ranch in Steinbeck's book the character Candy and his "ancient" dog symbolise the old. Candy is physically disabled "...stick-like wrist but no hand" due to this factor and old age is unable to work as hard as the other men on the ranch. Candy feels very isolated from the other men working on the ranch and feels like an outsider, as the men working on the ranch never include him into their leisure time. When the ranch men do go Susy's place or play games, Candy wants to be invited even if he doesn't do what the other men are doing. In The Thirties on ranches it was survival of the fittest " I drowned four of 'em...I kept the biggest". The "shooting" of Candy's dog represents society view of old age and the cripple as Candy's dog wasn't any "good to himself". ...read more.

Candy is a very lonely figure and he has no future without the dream due to being seen as "old" and useless. He wants to be able to settle down in a place where he is able to feel secure, safe and happy. The dream to have a little place to live with George and Lennie where he is able to do the odd jobs knowing he won't be engulfed by society. Crooks is another lonely soul in the book. He is unable to escape the racism in society that surrounds him. Crooks being a "nigger" and isolated from the rest of the ranch workers. Crooks has protected himself from society crushing him by tring to avoid trouble at all costs. Even though Crooks is very skilled he suffer from the disadvantages of racism and being physically disabled with his "crooked back". As for Curley's wife she dreams of being a big star thinking she could be an actress. She craves fame as she thinks she'll get the attention from everyone that she desires. Her personal goal is to be loved and adored and to actually feel wanted. As she gets "awful lonely" as she feels very isolated and cut of being on the ranch as the men don't pay her the attention she would like "Ain't I got a right to talk to nobody?". Curley's wife says "I wouldn't be livin' like this, you bet", she thinks that by being a star she could build up a better life for herself. The dream proves futile for the characters in the book due to tragic events in the book, that build up their odds against them for achieving their dream. ...read more.