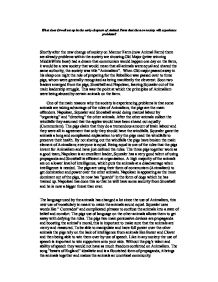 What does Orwell set up in the early chapters of Animal Farm that the new society will experience problems?

What does Orwell set up in the early chapters of Animal Farm that the new society will experience problems? Shortly after the new change of society on Mannor Farm (now Animal Farm) there are already problems within the society are showing.Old Major (prize winning MiddleWhite boar) had a dream that communism would happen one day on the farm, it would be a new society that would mean that all animals were equal and shared the same authority, the society was title "Animalism". When Old major passed away in his sleep one night the role of preparing for the Rebellion was passed over to three pigs, whom were generally recognised as being manifestly the cleverest. ...read more.

Squealer gave the animals a long and complicated explanation to why the pigs need the windfalls to preserve their health. By not sharing out the windfalls the pigs have broken the main element of Animalism; everyone is equal. Being equal is one of the rules that the pigs invent for Animalism and have just defined the rules. The three pigs together work as a good team, Napolean is an excellent leader, Squealer has a very good talent of using propaganda and Snowball is efficient at organisation. A high majority of the animals are on a lower level of intelligence, which puts the animals at a disadvantage when intelligence is needed. ...read more.

The pigs two main persuasive devices are propaganda and boosting the animal's moral, this is important to make sure that the animals are merry and reassured. To be able to manipulate and have full power over the other animals the pigs rely on the lack of intelligence from animals like Boxer and Clover and then being able to win them over by use of speech. Like in any society the use of speech is important to win supporters onto your side. Without the pig's talent and ability of speech they would not have as much freedom conferred on Animalism. The song "beasts of England" idealistic and is a flourished form of propaganda, it brings the animals together and makes the animals an uncritical community. ...read more.