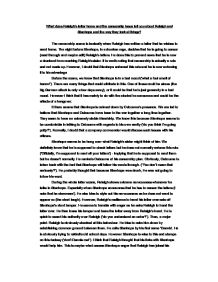 What does Raleigh's letter home and the censorship issue tell you about Raleigh and Stanhope and the way they look at things?

What does Raleigh's letter home and the censorship issue tell you about Raleigh and Stanhope and the way they look at things? The censorship scene is basically when Raleigh has written a letter that he wishes to send home. The night before Stanhope, in a drunken rage, decides that he is going to censor (read through and maybe edit) Raleigh's letters. He does this to prevent news that he is now a drunkard from reaching Raleigh's sister. It is worth noting that censorship is actually a rule and not made up. However, I doubt that Stanhope enforced this rule and he is now enforcing it to his advantage Before the scene, we know that Stanhope is in a bad mood ('what a foul smell of bacon!'). ...read more.

Stanhope seems to be hung over what Raleigh's sister might think of him. We definitely know that he is supposed to check letters but he does not normally enforce this rule. ('Officially, I'm supposed to read all your letters') - implying that he is supposed to read them but he doesn't normally. He reminds Osbourne of his censorship plan. Obviously, Osbourne is taken back with the fact that Stanhope will follow his words through. ('You don't mean that seriously?'). He probably thought that because Stanhope was drunk, He was not going to follow his word. During the whole letter scene, Raleigh shows extreme nervousness whenever he talks to Stanhope. Especially when Stanhope announces that he has to censor the letters (I note that he stammers'). ...read more.

He now, on top of everything else, has the added pressure on what to do with Raleigh. The letter is eventually read out and it turns out that Raleigh has not written anything bad about Stanhope but he practically sings his praises. He announces that he is still proud to be his friend. Stanhope may feel ashamed of this or he may feel embarrassed. Overall, Stanhope's views on things are that he wants it there and then. He has no patience, and he prefers to use anger and upfront techniques to get what he wants. Raleigh however believes in good old friendship values, which is why he is so shocked when Stanhope reacts in the way that he does. He may have felt that he would be treated differently. We also realise that Raleigh thinks of things in a logical and sensible manner as he acknowledges that the Germans are genuine human beings. ...read more.