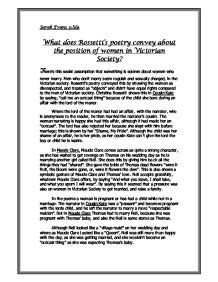 What does Rossetti's poetry convey about the position of women in Victorian Society?

Sarah Evans 11Jda What does Rossetti's poetry convey about the position of women in Victorian Society? There's this sexist assumption that something is solemn about women who never marry. Men who don't marry seem roguish and sexually charged, in the Victorian society. Rossetti's poetry conveyed this by showing the women as disrespected, and treated as "objects" and didn't have equal rights compared to the men of Victorian society. Christina Rossetti shows this in Cousin Kate by saying, "call me an outcast thing" because of the child she bore during an affair with the lord of the manor. Where the lord of the manor had had an affair, with the narrator, who is anonymous to the reader, he then married the narrator's cousin. The woman narrating is happy she had this affair, although it had made her an "outcast". The lord has also rejected her because she slept with him before marriage; this is shown by her "Shame, My Pride". ...read more.

The narrator in Cousin Kate was a "peasant" and becomes pregnant with the lords child, and he left the narrator to marry a more "respectable maiden". But in Maude Clare Thomas had to marry Nell, because she was pregnant with Thomas' baby, and also the Nell is same status as Thomas. Although Nell looked like a "village maid" on her wedding day and where as Maude Clare Looked like a "Queen", Nell was still more than happy with the day, as she was getting married, and she wouldn't become an "outcast thing" as she was expecting Thomas's baby. It seems that the women in the Victorian society believed that the man loves them more then whom they are with for different reasons. In Maude Clare, Nell knows that Thomas still loves Maude Clare deep down but she says "I'll love him till he loves me best, me best of all". ...read more.

This could be because those men took their purity, before marriage. The narrator in Cousin Kate can't marry because of her status as "low class" and she has had a child outside of marriage, so she would be able to marry again as she already has a child out of marriage and is a "disgrace" to the public eye. Maude Clare hasn't married but says "the lilies have faded now", since they picked the lilies, also saying that she no longer loves Thomas no more and her love has faded Thomas too, as time has gone on. So Maude Clare comes across as a strong woman in this society. But the narrator in Cousin Kate doesn't come across as a strong character like Maude Clare. The poems convey that the women in Victorian Society that they were not treated equally to the men, but the higher the class they were the stronger character they seemed to have, compared to the low classed girls such as the narrator in Cousin Kate. The men seemed to "seduce" women, ...read more.