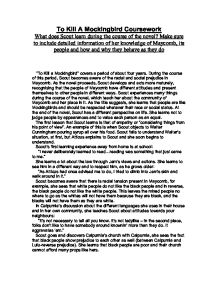 What does Scout learn during the course of the novel? Make sure to include detailed information of her knowledge of Maycomb, its people and how and why they behave as they do

To Kill A Mockingbird Coursework What does Scout learn during the course of the novel? Make sure to include detailed information of her knowledge of Maycomb, its people and how and why they behave as they do "To Kill a Mockingbird" covers a period of about four years. During the course of this period, Scout becomes aware of the racial and social prejudice in Maycomb. As the novel proceeds, Scout develops and acts more maturely, recognising that the people of Maycomb have different attitudes and present themselves to other people in different ways. Scout experiences many things during the course of the novel, which teach her about the community of Maycomb and her place in it. As the title suggests, she learns that people are like Mockingbirds and should be respected whatever their race or social status. At the end of the novel, Scout has a different perspective on life. She learns not to judge people by appearances and to value each person as an equal. The first lesson that Scout learns is that of empathy or "considering things from his point of view". An example of this is when Scout objects to Walter Cunningham pouring syrup all over his food. ...read more.

As Scout grows older she becomes more curious. She even goes far as to enter the world of the Negro and to go to the church with Calpurnia. With each new situation, a great deal of experience is gained, and by the end of the novel, all of the children go to the trial of Tom Robinson. With the trial, Scout officially enters the world of adulthood. Games are no longer being played, and she realises that she has the right to her opinions. Scout's world and the number of decisions she is forced to make seem endless compared to the limits and decisions of her youth. Scout and Jem conflict the entire novel, usually because of their contrasting stages in life. Scout does not understand why at one pint in the day, Jem wants to play with her and at the other he will have nothing to do with her. She accepts the situation, and eventually, when she reaches Jem's stage in life, she understands it. During the church scene, Lulu argues with Calpurnia about bringing Scout and Jem to their church. Calpurnia's wisdom goes far beyond that of Lulu's. ...read more.

The Ewells live in dirty conditions, have no money and re unemployed. They are considered to be "white trash". They are uneducated, full of disease and do not seem to care. The Ewells lived "behind the town garage dump in what was once a Negro cabin." The Ewells are simply reacting to how people and life has treated them. Scout realises that the Cunningham family is a poor family. They are so poor that Scout believes that Walter "had probably never seen three quarters together at the same time in his life." Despite the lack of material possessions, the Cunnighams have a reputation to uphold. They never take anything they cannot pay back. They even refuse church baskets and scrip stamps. The family does not have much, but they get along with what they have. When they use Atticus' services, they pay him back with stovewood, hickory wood, smilax, holly and turnip greens. The Cunninghams have pride in their land and go hungry to keep it and to vote as they please. There is severe racial intolerance by many towns' people, and the extreme ostracizing that the Finches underwent in the name of maintaining conscience. Many of the townspeople are ignorant and racist; they also have personal strengths that keep them from being all bad and give them hope for becoming better. Word count: 1454 ...read more.