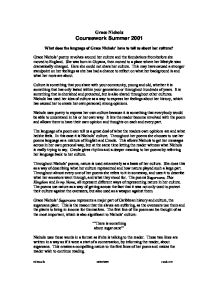 What does the language of Grace Nichols&amp;#146; have to tell us about her culture?

Grace Nichols Coursework Summer 2001 What does the language of Grace Nichols' have to tell us about her culture? Grace Nichols' poetry revolves around her culture and the foundations from before she moved to England. She was born in Guyana, then moved to a place where her lifestyle was dramatically changed. Here she could not share her culture. This may have caused a stronger standpoint on her feelings as she has had a chance to reflect on what her background is and what her roots are about. Culture is something that you share with your community, young and old, whether it is something that has only lasted within your generation or throughout hundreds of years. It is something that is cherished and protected, but is also shared throughout other cultures. Nichols has used her idea of culture as a way to express her feelings about her history, which has caused her to create her own personal, strong opinions. Nichols uses poetry to express her own culture because it is something that everybody would be able to understand in his or her own way. It lets the reader become involved with the poem and allows them to have their own opinion and thoughts on each and every part. The language of a poem can tell us a great deal of what the readers own opinions are and what he/she feels. In this case it is Nichols' culture. Throughout her poems she chooses to use her poems language as a mixture of English and Creole. This allows Nichols to get her messages across in her own personal way, but at the same time letting the reader witness what Nichols is really trying to say. Creole gives rhythm and a deeper meaning to her poems by referring her language back to her culture. Throughout Nichols' poems, nature is used extensively as a basis of her culture. She does this as a way of describing what her culture represented and how nature played such a large part. ...read more.

In her poem This Kingdom, Nichols also uses nature as a reigning part of her culture, as the sugar cane was in sugar cane. Standard English is used in this poem instead of Creole so that the message is clearer to the English cultured reader. Firstly, using the island itself shows that the slaves consider the island as a beautiful place of worth: '"and the sea circling all is a spectrum of blue jewels"' (lines 15-17) The use of the words "blue jewels" as a metaphor, to signify the sea, tells us that they think that the island itself is a great, precious part of nature, that its full of opportunity, even though they are trapped to toil and suffer. By placing "all" on it's own Nichols has perceived the island as being everything the slaves know, as it is all they have seen. Nichols uses nature as a metaphor for the slaves and their deeds in revolt against the overseers: '"Soft winds can turn volatile"' This suggests change, and uses nature as a symbol of their destruction against the overseer. The use of "volatile" on a separate line underlines the fact of the chaos they will bring. It also gives it more depth and meaning as it creates more significance for the reader. This was also shown in Sugar cane but as the overseers destroying the slaves. The slaves also use the one thing that they are closest to as they have the power over nature. They can use it against their enemies, the overseers: '"can merge with rains '"can turn hurricanes"' (lines 22-23) This shows that the slaves see themselves as having the power to change things, that they have the ability to use their culture, nature as an advantage against them. The use of repetition in 'can' is used as almost a statement, telling us that they are certain that they will take revenge. ...read more.

The river is a place where her roots are, but can also be seen as the river being a part of nature, and nature being her roots. This is once again a reference to how important nature is to Nichols' culture. The poem is structured in a way to show the slaves feelings for her child, as well as the slaves. At the beginning of the poem the lines are short, as if talking to a child, but as the slave begins to speak of the slaves the lines become long. This creates a serious, intense atmosphere filled with anger directed towards the rapist. The lines also contain evil more words, which allow the reader to see the true anger of the slave mother. This poem is like many others of Nichols' as it shows an immense anger towards the whites, and gives the reader a perspective of the pain that they caused. In My Name however, shows this in a deep, powerful and personal way, and in many ways is causes the reader appreciate the pain more than any of the other poems. This is also shown, as she includes no use of Creole. This is so the reader can have a deeper relation with the poem and can understand it more. In conclusion, Nichols has found a way to express her feelings about her culture, and its history. She has used poetry as a way to show the deepest feelings, many of which come straight from conscience to paper with her use of enjambment. Her use of language involves the reader and invites them into what her ancestors experienced and what her culture involved. She reveals the hope, pain and endurance her ancestors experienced and how they prevailed. Nature is just one of the parts of her culture which she expresses in her poems, of which she uses language to express. Other than nature she also reveals her own portrayal of woman, her thoughts on slavery or her interpretation of dignity and repression. ?? ?? ?? ?? Ed Francis 28/04/2007 cwork GN ...read more.