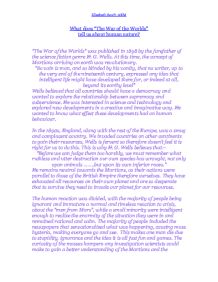 What does &quot;The War of the Worlds&quot; tell us about human nature?

What does "The War of the Worlds" tell us about human nature? "The War of the Worlds" was published in 1898 by the forefather of the science fiction genre H. G. Wells. At this time, the concept of Martians arriving on earth was revolutionary. "So vain is man, and so blinded by his vanity, that no writer, up to the very end of the nineteenth century, expressed any idea that intelligent life might have developed there far, or indeed at all, beyond its earthy level" Wells believed that all countries should have a democracy and wanted to explore the relationship between supremacy and subservience. He was interested in science and technology and explored new developments in a creative and imaginative way. He wanted to know what effect these developments had on human behaviour. In the 1890s, England, along with the rest of the Europe, was a smug and complacent country. ...read more.

it glistened like wet leather". The face "was a mouth under the eyes, the lipless brim of which quivered and panted and dropped saliva". The mouth was a v shape, with a pointed upper lip and a wedge -like lower lip. The creature had no chin and 2 groups of 8 tentacles. The Martians were sleepless and in fatigable. They didn't eat. Instead "they took the fresh living blood of other creatures, and injected it into their own veins". This shows they are much more advanced than us, as they don't waste time eating and sleeping. For these reasons Wells admires them and sees them as the evolution of humans. When the invasion begins, morality disappears. Even the narrator is selfish and bribes the landlord for his horse and cart. He doesn't even tell the landlord the honest reason why. The worst of human nature is displayed, as anarchy breaks out. ...read more.

In conclusion, the behaviour of humans as a whole, shows that we become barbarians in extraordinary circumstances. Human nature is very fragile as is our existence. "We cannot regard this planet as being fenced in and a secure abiding place for man" The story is both political and scientific. Wells believes we need to learn to work together in a calm and rational manner as this is the only way to protect both the planet and ourselves. This novel is still relevant today as we still have a blind faith in technology and we have caused global warming by ignoring nature and concentrating on technology that is destroying the planet and ourselves, due to technology new crime has come into play. How far will we go until we realize how our planet and its resources are not forever and that if we do not protect them they will die and us along with them? ?? ?? ?? ?? Elizabeth South 11KM ...read more.