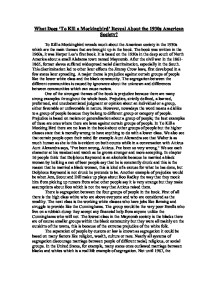 What Does 'To Kill a Mockingbird' Reveal About the 1930s American Society? To Kill a Mockingbird reveals much about the American society in the 1930s which are the main themes that are brought up in the book. The book was written in the 1960s, it was Harper Lee's first book. It is based on the 1930s in the deep south of North America about a small Alabama town named Maycomb. After the civil war in the 1861-1865, former slaves suffered widespread racial discrimination, especially in the South. This discrimination led to other later effects the Jimmy Crow laws, first developed in a few states later spreading. A major theme is prejudice against certain groups of people like the lower white class and the black community. The segregation between the different communities is caused by ignorance about the unknown and differences between communities which can cause racism. One of the strongest themes of the book is prejudice because there are many strong examples throughout the whole book. Prejudice, strictly defined, a learned, preformed, and unsubstantiated judgment or opinion about an individual or a group, either favorable or unfavorable in nature. However, nowadays the word means a dislike to a group of people because they belong to different group or category of people. ...read more.

The lowest class in the Maycomb society is the blacks there are of course smaller groups within the black community but they were all mainly on the outskirts of the towns, this is because of the extreme prejudice of the white folk. The separation of people by custom or law is known as segregation it could be based on many factors like religion, wealth, culture or race. Nearly all systems of segregation discourage marriage between people of different racial, religious, or social groups. In the United States, for example, many states once outlawed marriage between blacks and whites which is a real life example of segregation. Not until 1967, the Supreme Court of the United States ruled such laws unconstitutional, which was one group discriminating another it was noticed that the more powerful group that was in control was the one that does the discrimination. The United States was not the only country of course segregation was found all over the world among various countries throughout the past. We know that all the white folk live separately from the black folk this is an example of segregation in To Kill a Mocking Bird, because the two communities between the two groups over the time that they are separated the more dominant ...read more.

Another point revealed about the American Society would be that all the white middle class would gossip at tea parties as shown in chapter 24. Where the high classed white people Harper Lee stereotypes them and tries to show that they are good and caring Christens even though they look down on every one else and yet don not help them in any way and that everyone else is a lower standard below them, but the book mentions a strong reaction from Aunt Alexandra this could be a superficial reaction but really she doesn't care and puts on a false front another interpretation of this could be that she learned from Atticus and she is sincere that something so bad had happened to an innocent man. "'Tom's dead.' Aunt Alexandra put her hands to her mouth. 'They shot him,' said Atticus. 'He was running. It was during their exercise period. They said he just broke into a blind raving charge at the fence and started climbing over. Right in front of them-'" This quote shows that Tom Robinson as the act of a desperate man he attempted to escape prison. This makes the reader sympathize with Tom because he never did anything wrong in the first place and was innocently and wrongly killed. ...read more.

This essay is well researched and has a great deal of social and historical context which is necessary in order to answer the question fully.
There are some well chosen quotes which support statements. The writer clearly understands the main themes of the book and shows knowledge of the novel as a whole.
At times the essay needs to be focused more on the question and some lines of argument are not discussed fully.