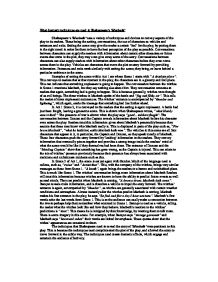 What dramatic techniques are used in Shakespeare's 'Macbeth' Shakespeare's 'Macbeth' uses a variety of techniques and devices to convey aspects of the play to its readers. These being the setting, conversations, the use of characters as vehicles and entrances and exits. Setting the scene may give the reader a certain 'feel' for the play, by putting them in the right mood in order for them to have the best perception of the play as possible. Conversations between characters can supply the readers with information about certain other characters or future events that come in the plot, they may even give away some of the story. Conversations between characters can also supply readers with information about other characters before they even come across them in the play. Vehicles are characters that move the plot or story forward by providing information. Entrances and exits work similarly with setting the scene; they bring, or leave behind a particular ambience to the scene. ...read more.

This is shown when Shakespeare writes, "what bloody man is that?" The presence of war is shown when the play says "good...soldiers fought". The conversation between Duncan and the Captain reveals information about Macbeth before his character even enters the play. Readers trust this information given about Macbeth's personality because they assume that these men know who Macbeth really is. This is displayed in parts of the play such as, "For brave Macbeth", "what he hath lost, noble Macbeth hath won". The vehicles in this scene are all four characters that appear in it, in particular, the Captain and Duncan, as they speak mostly of Macbeth. These four characters push the story forward by 'leaking' information to the readers. They convey information that eventually pieces together and provides a strong image inside the readers' mind of what the scene would be like if they themselves had been there. ...read more.

Macbeth's first words echo the last words from Scene 1. This is so the audience can easily make a connection between the two to perhaps help them remember what occurred in Scene 1. Banuqo is used as a vehicle, telling the reader what the witches look like and how they behave. Macbeth's reaction to the witches' predictions is "start". This means he is intrigued by their knowledge, by wanting them to talk more. There is some imagery in this scene. For example, when Banquo says "strange garments" and Macbeth says "borrowed robes" their words are linked for emphasis. These quotes show that the withes' appearances are unnatural to them. The techniques that Shakespeare used to reveal the story of 'Macbeth' were pertinent to this play. This is because the techniques used complimented the plot of the play, and allowed the story to move forward in the subtle way. The techniques used create dramatic effects, which engage and entertain the audience effectively. ...read more.

When analysing a play it is vital to remember that it is a piece of drama that is being analysed. The way the drama is presented on stage should drive the analysis.
This analysis is too brief when considering a Shakespeare play at GCSE.