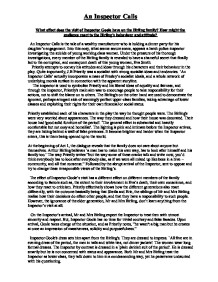 What effect does the visit of Inspector Goole have on the Birling family? How might the audience react to the Birling's behaviour and attitude?

An Inspector Calls What effect does the visit of Inspector Goole have on the Birling family? How might the audience react to the Birling's behaviour and attitude? An Inspector Calls is the tale of a wealthy manufacturer who is holding a dinner party for his daughter's engagement. Into this cosy, what seems secure scene, appears a harsh police inspector investigating the suicide of young working class woman. Under the pressure of his thorough investigations, every member of the Birling family is revealed to have a shameful secret that finally led to the corruption, and consequent death of this young woman, Eva Smith. Priestly attempts to convey his attitudes and ideas through his characters and their behaviour in the play. Quite importantly, J.B Priestly was a socialist with strong socialist ideas and tendencies. 'An Inspector Calls' actually incorporates a mass of Presley's socialist ideals, and a whole network of underlying morals surface in connection with the apparent storyline. The inspector is used to symbolise Priestly and his liberal ideas of equality and fairness, and through the inspector, Priestly's main aim was to encourage people to take responsibility for their actions, not to shift the blame on to others. The Birling's on the other hand are used to demonstrate the ignorant, perhaps arrogant side of seemingly perfect upper-class families, taking advantage of lower classes and exploiting their rights for their own financial or social status. Priestly established each of his characters in the play the way he thought people were. ...read more.

She was claiming elaborate fine feelings and scruples that were simply absurd in a girl in her position." Mrs.Birling persists in her lack of involvement and tries to find a scapegoat, "...I accept no blame for it all... blame the young man who was the father of the child she was going to have, if, as she said didn't belong t her class, and was some drunken young idler, then that's all the more reason why he shouldn't escape. He should be made an example of. If the girl's death is due to anybody, then it's due to him." However, Mrs.Birling has no idea that the father of the child was her son, Eric. Ironically, when it is her own son involved, she begins to take notice of the trouble they have caused between them. When Mr and Mrs Birling ultimately realise that Inspector Goole is not infact a real inspector, Mrs.Birling expresses her distaste by saying what an awful hoax it was with such bad taste. She pretends she was never once drawn in by it, "I was the only one who didn't give in to him." This leads her to reject everything she had begun to learn. Just as it started to sink in that the Birling family, no matter how many airs or how good a glossy visage they put on, they are not secure from the consequences of their actions, these left with the inspector. In the end, Inspector Goole's visit caused no change in the way Mr and Mrs Birling think. ...read more.

With the Inspector's call effectively highlighting the problems of class divide, Priestly wanted his audiences to learn something from his plays. I think that the audience would react very unsympathetically to the effect on Mr and Mrs Birling. The audience, like Eric and Sheila, would be shocked at the easy rejection of what Goole was trying to get them to understand. Mr.Birling from the beginning was sexist and insensitive, "She'd had a lot to say - far too much - so she had to go," was his account of Eva Smith. A modern day audience may be familiar with the knowledge that in the past, there was a large social class divide, and a lot on unfair happening occurred which caused a lot of suffering, and I think such a contemporary audience would find the attitude of Mr and Mrs.Birling quite disturbing. However, I think that despite the initial wrong doings of Eric and Sheila, and the mistakes they made previous to Eva's death, the audience is understanding and are pleased at how some good has come of the whole ordeal. Eric and Sheila have seen what small-minded views their parents harbour and have learnt that all actions make consequences, as so when making decisions, you must think how they might effect other people. In conclusion, we can say that Priestly hints to the audience that the Birling's will have to take on board, and that they will, have to listen, or there will be lots of difficulty and pain to follow. The play finishes with an extraordinary ending where a real police officer turns up at the door, leaving the ultimate ending open for the individual to conclude. ...read more.