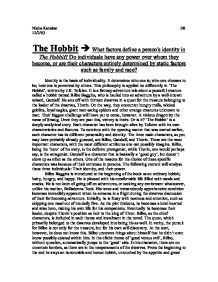 What factors define a person's identity in The Hobbit? Do individuals have any power over whom they become, or are their characters entirely determined by static factors such as family and race?

12/2/03 The Hobbit ==> What factors define a person's identity in The Hobbit? Do individuals have any power over whom they become, or are their characters entirely determined by static factors such as family and race? Identity is the basis of individuality. It determines who one is; who one chooses to be; how one is perceived by others. This philosophy is applied no differently in 'The Hobbit', written by J.R. Tolkien. It is a fantasy-adventure tale about a peaceful creature called a hobbit named Bilbo Baggins, who is hauled into an adventure by a well-known wizard, Gandalf. He sets off with thirteen dwarves in a quest for the treasure belonging to the leader of the dwarves, Thorin. On the way, they encounter hungry trolls, wicked goblins, loyal eagles, giant man-eating spiders and other strange creatures unknown to man. Their biggest challenge will have yet to come, however. A vicious dragon by the name of Smaug. Once they are past this, victory is theirs. Or is it? 'The Hobbit' is a deeply analytical story. Each character has been brought alive by Tolkien with its own characteristics and features. To continue with the opening matter that was started earlier, each character has its different personality and identity. The three main characters, as you may have probably already guessed, are Bilbo, Gandalf, and Thorin. ...read more.

He also brings the good of people's forces together and assists in planning the ultimate battle when the Goblins and Wargs attack. At the closing stages, he travels all the way back to Hobbiton with Bilbo and later visits him again with Balin. In a way, it could be said that Gandalf's role in the novel is to unify. He always turns up at the most imperative moments, helping the others with his advice and encouragement. Without him, it would be very difficult to keep peace between the Dwarves and Bilbo, whom at the start seem like very improbable colleagues. Gandalf is a solid representation of the good forces. Not avaricious like the Dwarves, he shows he is shrewd, judicious and obliging. He is proven to have quite a good sense of humour as well, and has deep insights of people. He knew from the very beginning that Bilbo was a potentially valiant character, and didn't judge him harshly, as the Dwarves did. A strange feature belonging to Gandalf was that he had an odd flair for unexpectedly appearing at the perfect times. Although he is powerful in an enchanted way, Gandalf preferred to use his intelligence rather than his magic, which gives him a particular uniqueness automatically. One of the most remarkable qualities of Gandalf is that although he puts plenty of effort and time into this quest, he does not in any way wish for anything, any reward for the assistance in this quest. ...read more.

However, this figure is different to the other two. Thorin did have power over who he could be at the end. This is why his persona changed from 'okay' to 'bad' to 'good'. It is just that he chose to be how he chose to be. The way Thorin gained his power was through heritage. He did not earn one bit of it himself. He lost this when he decided to act callous and cold. He regained his power slightly, though, when he came to his senses and act like a true leader. This matter is only one of the several one can choose to discuss about 'The Hobbit'. There are many different thoughts and ideas that would definitely be well-worth talking about. One of these could be talking about why Gandalf decided to assist the Dwarves in this specific adventure, as he probably may have had his pick of the lot. This is quite a good issue, but not the best. Several others require proper thinking. Themes could be discussed. The plot could be discussed. Themes of isolation of characters could also be discussed. Even a comparison with 'The Hobbit' and its sequel, 'Lord of the Rings' would be a nice idea for a report. It is interesting to see the changes one goes through during experience. Even when one may think it is the least expected. ...read more.